By the time a child reaches fifth grade, 85% of his or her curriculum will be taught through reading. But less than half of North Carolina’s fourth-graders read at a proficient level.

That was the discordant opening note for a panel of the NC Chamber of Commerce 2020 Education and Workforce Conference on Thursday. Relaying statistics that demonstrate the inadequate reading proficiency of the state’s third- and fourth-grade students, business leaders and academics stressed how deeply a child’s future depends on the ability to read.

They went further, too, noting that the state’s future depends on the child’s future.

“As business leaders, we cannot forget the need for a strong candidate pipeline beyond 2030,” panelist Sepi Saidi said. “Keeping our eye on the long-term prospects, not just for our own companies but for the long-term sustainability of our state’s economy, requires that we stay focused on the need to increase third-grade reading proficiency. And, I have to say, we have a long way to go.”

Last year, about 57% of the state’s third-graders tested at proficient level. The year before, it was barely over 56%. More daunting are the fourth-graders’ results on the 2019 National Assessment of Educational Progress, where only 36% who were tested met the proficiency standard on the so-called Nation’s Report Card.

“It cannot be emphasized enough that third-grade reading proficiency is one of the most important milestones in a child’s educational journey – one which can break down the barriers to true equality,” Saidi said. “There’s an old saying: Until third grade, children learn to read. After third grade, they read to learn.”

A call for the ‘Science of Reading’

For some time now, leaders throughout North Carolina have been exploring ways to use more science-aligned reading instruction — for future teachers in the educator prep programs and for students in the classrooms.

On Thursday’s panel, titled “Protecting a Future Talent Pipeline after COVID-19: Increasing 3rd-Grade Reading Proficiency,” Graham dove further into the Nation’s Report Card — pointing to gaps in reading proficiency between racial, ethnic, gender and socio-economic groups. For instance, while 59% of Asian and 49% of white students were proficient, only 23% of Hispanic students, 20% of Black students and 21% of low-income students were.

“What is criminal,” Graham said, “is that these performance gaps have persisted since at least 1992, with very little closure of the gaps in that time.”

In addition to achievement gaps showing Black and brown kids trailing other racial groups, Graham noted that the groups out in the front — Asian and white students — “aren’t really setting the world ablaze with their performance.” 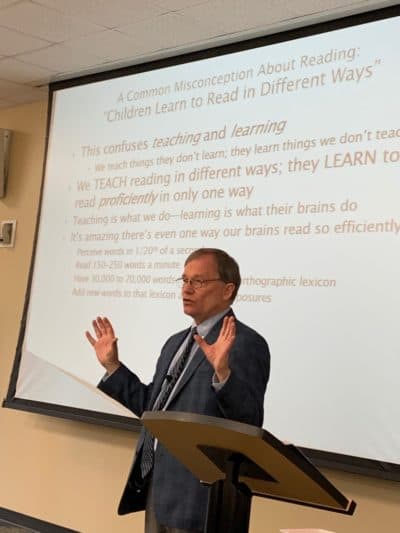 “Until we have teachers and principals who consistently teach students how to read based on the established science of reading, then the harsh truth is we will continue to produce struggling readers,” Graham said.

Graham referred to components of the science of reading as explained in a 2000 National Reading Panel report — and also discussed how Mississippi spurred a sharp increase in its reading proficiency scores.

He also talked about the National Council on Teacher Quality report, which last year painted a less-than-stellar picture of educator preparation programs in the state. NCTQ grades educator prep programs based on their fidelity to teaching based on the science of reading.

While only a handful of colleges received an A, one — Lenoir-Rhyne University — was held up as one of just three educator prep programs labeled as national models. (Read more about that here.)

Before Graham called for instruction based on the science of reading, Rabon called for further investment in pre-kindergarten programs.

“Why?” he asked rhetorically. “Because it works.”

Rabon talked about a policy recommendation from the 2017 business roundtable report calling for increasing access to NC Pre-K or a high-quality program for 4-year-olds.

He said Duke University has studied NC Pre-K for more than 16 years, calling it the longest study of its kind in the nation. According to the Duke study, there were four critical findings related to participation in NC Pre-K:

Rabon said that when the General Assembly looked at low-income areas of the state which also performed well on reading proficiency tests, it found that those areas also had 75% or better participation in NC Pre-K.

The state funding structure requires counties to cover 40% of the cost of NC Pre-K, which can make it difficult for lower-income counties to participate. Rabon said the chamber and other business leaders are now asking for the following changes:

As with reading proficiency scores, there is a lot of ground to make up in boosting attendance in NC Pre-K. Only 25% of 100 counties are meeting the 75% participation goal.

Business leaders on Thursday acknowledged the challenges, but committed to continue fighting — out of necessity for the future pipeline.

“I see the problem as an engineer,” Saidi said. “When something is not working, we don’t give up and accept where you are as the status quo. We fix it. And our goal in North Carolina is to fix it and exceed the national average.”