Bills to provide teacher assistants are stuck in General Assembly. Teachers are feeling stuck, too.

Bills to provide teacher assistants are stuck in General Assembly. Teachers are feeling stuck, too. Students in Karen Brown's first-grade class at Rosman Elementary are engaged in a whole-class phonics lesson. After, they break into small group instruction. Rupen Fofaria/EducationNC

Susan King knows what’s coming. She breaks her first grade class into groups during literacy block and can already feel the pull in every direction.

While she moves to one small group, a student in another starts to act out. He doesn’t know how to do his work without help. A different group, working on writing, is calling out for help. But she can only be in one place at a time.

“I’m a one-man band,” said King, who teaches at Lakeshore Elementary School in Iredell-Statesville Schools. “That’s what I tell them, ‘I’ll be right there, but I’m a one-man band so just hang on.'”

Teachers across the state, particularly in K-3 classrooms, echo this sentiment. Since the 2008-09 school year, the number of teacher assistants in North Carolina public schools has dropped by 9,470, according to data from the Department of Public Instruction. That’s a devastating trend, several teachers said, particularly with passage this session of a new law aimed at improving Read to Achieve.

That law, the Excellent Public Schools Act of 2021, calls for training and instruction from pre-K to fifth grade to align with the science of reading, a vast body of research on how kids learn to read and effective instruction practices. Implementation of the law will include greater emphasis on small group instruction, but without teacher assistants, teachers are wary.

“I hope that they realized the importance of having instructional assistants in the lower grades,” said Samantha Ray, a first grade teacher at Brevard Elementary in Transylvania County Schools.

“Literacy is critical,” Sen. Valerie Foushee, D-Orange, said. “And we know how important it is to have a teacher assistant in every classroom.”

Foushee is a primary sponsor of SB 359, along with principal sponsor Sen. Wiley Nickel, D-Wake, and Sen. Gladys Robinson, D-Guilford. Foushee is a former school board member, and before that she was a parent volunteer in her two sons’ classrooms.

She said she has seen first-hand the impact on teachers when they have adult support in the classroom — particularly support from teacher assistants, who receive specialized training and certification.

“In my opinion, we don’t need a lot of rhetoric about it,” Foushee said.

When King first started teaching, she had a teacher assistant in her first and second grade classrooms. That was in the mid-1990s. She didn’t teach for eight years after her son was born and came back in 2009. That was the first school year after the recession and the beginning of the decline in the teacher assistant numbers across the state.

King said she’s lucky to have a teacher assistant in her room for 45 minutes on a given day, and that often in small groups she has to put students she’s not working with on a tablet — which she has a problem with.

“When you don’t have the help, but then they’re giving you all the tablets, and it’s almost like do that instead — but as a first grade teacher, I don’t feel like that’s appropriate, either,” she said.

In order for the K-3 Literacy and Improvement Act to move forward — whether in the Senate or in the House — it still needs to clear the committee process, pass two more readings in its chamber, and then move to the other chamber.

The crossover deadline is May 13, which is the date a bill has to move from one chamber in the General Assembly to another in order to be eligible for consideration throughout the remainder of the legislative session.

Nickel said even if the bills don’t move forward, he hopes the spirit of the bills will show up in the state’s budget.

“We hope that some consideration will be taken when the budget is being drafted to make sure our K-3 classrooms get the adequate amount of TAs they need,” Nickel said. 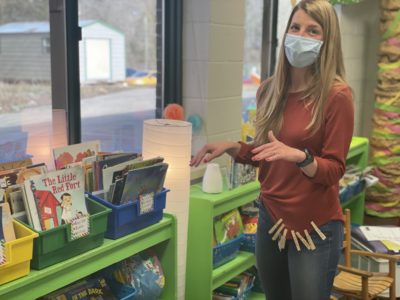 Business leaders stand together on pre-K and science of reading