For the last few months, N.C. Community College System (NCCCS) leaders have been working to make a case for their legislative priorities in this year’s long session, which officially started earlier this month. The system’s updated FY 2022-25 legislative agenda seeks an increase in state funding by $232 million over the next two years for increases in employee salaries and student investment.

“This discussion will continue as we get closer to the long session,” State Board of Community Colleges Chair Burr Sullivan said in October. “But we all need to be committed to staying the course on those two components to earn $232 million so we can expand our reach in the next two years.”

This week, the work of the General Assembly’s long session really begins. Lawmakers will work on a budget for the next two years, along with any changes to state policy and law —including education.

So what will the next two years look like for the community college system? First, a look back.

What did community colleges get in the last two budgets?

That investment included a 2.5% salary increase each year for community college personnel, a one-time bonus, minimum wage increases, nearly $80 million in budget stabilization funds, and more than $20 million to recruit and retain faculty. The state budget also allocated $400 million for capital improvement projects and repairs at the state’s 58 community colleges over four years and nearly $50 million for equipment and furniture purchases.

According to a press release from the system office, the last biennium budget was the largest the system has received in the last decade. It represented an overall increase of 4% and an increase of 12% per full-time student equivalent (FTE), a measure based on the number of accumulated student hours.

During last year’s short session, the system received an extra 1% across-the-board salary increase for most community college employees. If an employee is paid on an experience-based salary schedule, they got an extra 2% pay increase.

Though leaders were pleased with the previous budget, some requests remain — including increased funding for employees and students.

The new NCCCS 2022-26 strategic plan, which passed in October, outlines five goals for the system – including one specifically to increase state funding:

The State Board of Community Colleges reviewed the second year of its FY 2022-25 legislative agenda in October. The agenda approved in January 2022 requested an additional 1% employee salary increase and a 4% increase for student investment in the 2022-23 short session. While the community college system received the 1% employee salary increase in the budget passed by the legislature in early July, it did not receive the 4% increase for student investment.

Jason Hurst, president of Cleveland Community College, told the Board’s legislative committee in October that the N.C. Association of Community College Presidents “felt really compelled to stick with our three-year plan” developed the year before.

“We felt like that will go a long way in building trust with our legislators. They’ve seen this plan – it hasn’t changed,” Hurst said. “If I’m not mistaken, if funded this will be the largest increase in the history of the two-year community college system. So this is a huge shot in the arm for the system should this be completely funded.”

This request falls on the heels of a funding cut due to decreased enrollment. Because state funding of community colleges is largely based on enrollment, July’s budget cut NCCCS funding by a little more than $12 million to reflect the enrollment declines seen across the system over the past three years.

The NCCCS saw a 17% decrease in headcount the first year of the pandemic, according to system data, from fall 2019 to fall 2020. The year before, the system saw an increase of 3% in total headcount. And while headcount has increased since 2020, it’s still down from before the pandemic. In fall 2021, 55,000 fewer students were attending community colleges compared to fall 2019. The system has said it will publish fall 2022 enrollment data in February.

In January 2022, the Board also discussed a specific provision from the budget some members worried could threaten future funding.

That provision requires the state Department of Public Instruction to study how it could transition to using a new funding formula — FTE instead of average daily membership (ADM). Community colleges receive funding according to their FTE, a measure based on the number of accumulated student hours.

Shifting to FTE for school districts could affect how dual-enrollment students like those in Career and College Promise are counted.

“Obviously, any adjustment to that formula could impact our colleges,” said NCCCS Director of Government Relations Alex Fagg.

The updated agenda, presented by NCCCS Interim President Bill Carver in October, is asking for $86.8 million in funding for a 7% salary increase for faculty and staff over the next two years. The requested increase rate is the same as what the system requested in January 2022, with the investment amount increased to reflect the 1% raise received last year.

“Faculty salaries have been our number one priority for years, and while we have made some progress, we still have a long way to go,” said Jeff Cox, president of Wilkes Community College and head of the N.C. Association of Community College Presidents. “If we are going to graduate outstanding nurses, for example, we must have outstanding nursing faculty. And we compete with all the health care community in hiring our nursing instructors.”

Such instructors are usually highly qualified with master’s degrees. People who meet such criteria typically can make nearly $100,000 in the medical field, Cox said, which is much higher than most instructors are paid.

“We have the same issues related to many of our staff in terms of our need to be competitive in order to keep our staff employed at our colleges,” he said.

North Carolina ranks 41st in the nation for community college faculty pay, according to data from the Integrated Postsecondary Education Data System (IPEDS). In comparison, the state ranks 24th in faculty pay at four-year institutions.

In 2020-21, the weighted nine-month faculty salary in the NCCCS was $50,252, according to IPEDS, compared to $67,585 among all U.S. community college faculty. That data does not include the latest salary increases from the November 2021 and July 2022 budgets.

“We’ve always liked to think that we are a leader. And to attract the talent necessary to stay competitive requires an attention to faculty funding,” Carver told EdNC. “If we lose our talent, we’re going to lose our students.”

In addition to employee raises, the system is asking for $145.88 million in student investment, which is about $3 million less than its request in January 2022. Those requested funds, Carver said, would be distributed across the 58 community colleges based on a size formula. (For reference, if the requested funds were evenly divided among the 58 campuses, each college would receive roughly $2.5 million over the next two fiscal years.)

At that point, individual colleges could choose where to invest the money. The NCCCS is working with colleges to track how they plan to spend the funds if the request is granted. At its January meeting, the Board said some colleges would add the funds to their base state funding, for example, while some would put the funds toward new or expanded programs.

NCCCS students are currently funded at 53% of UNC System first-year and sophomore students in comparable classes, the Board’s three-year request document says, “despite smaller average class sizes and faculty credentials that meet or exceed those in the UNC System.”

The January 2022 request asks for an increase in the system’s recurring student FTE value to 66% of equivalent UNC courses, the document says.

As the community college system — much like the rest of the state — works to recover from pandemic enrollment declines, Carver said the requested funding is crucial. Such funds would help the system stabilize while finding creative ways to continue attracting students back to campus.

“We’re appreciative of every dollar that our funding partners down the street give us. I think they have listened, and we have seen support,” he said. “This is a big ask for the system. As we come out of this post COVID, North Carolina is a hot state — it’s going to require that we keep our talent in place. … That’s why we’re asking our funding partners again to support us in that regard, to keep us competitive.” 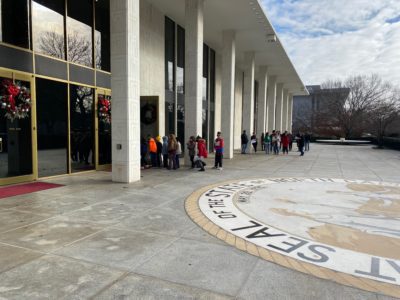 Here comes the legislative long session. What does that mean for K-12 education? For state’s early childhood landscape, a legislative session before a funding cliff 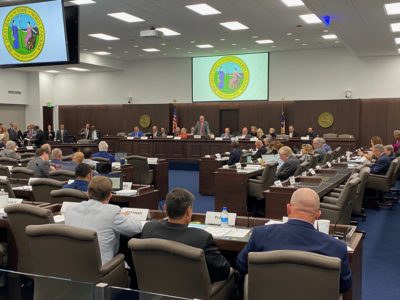