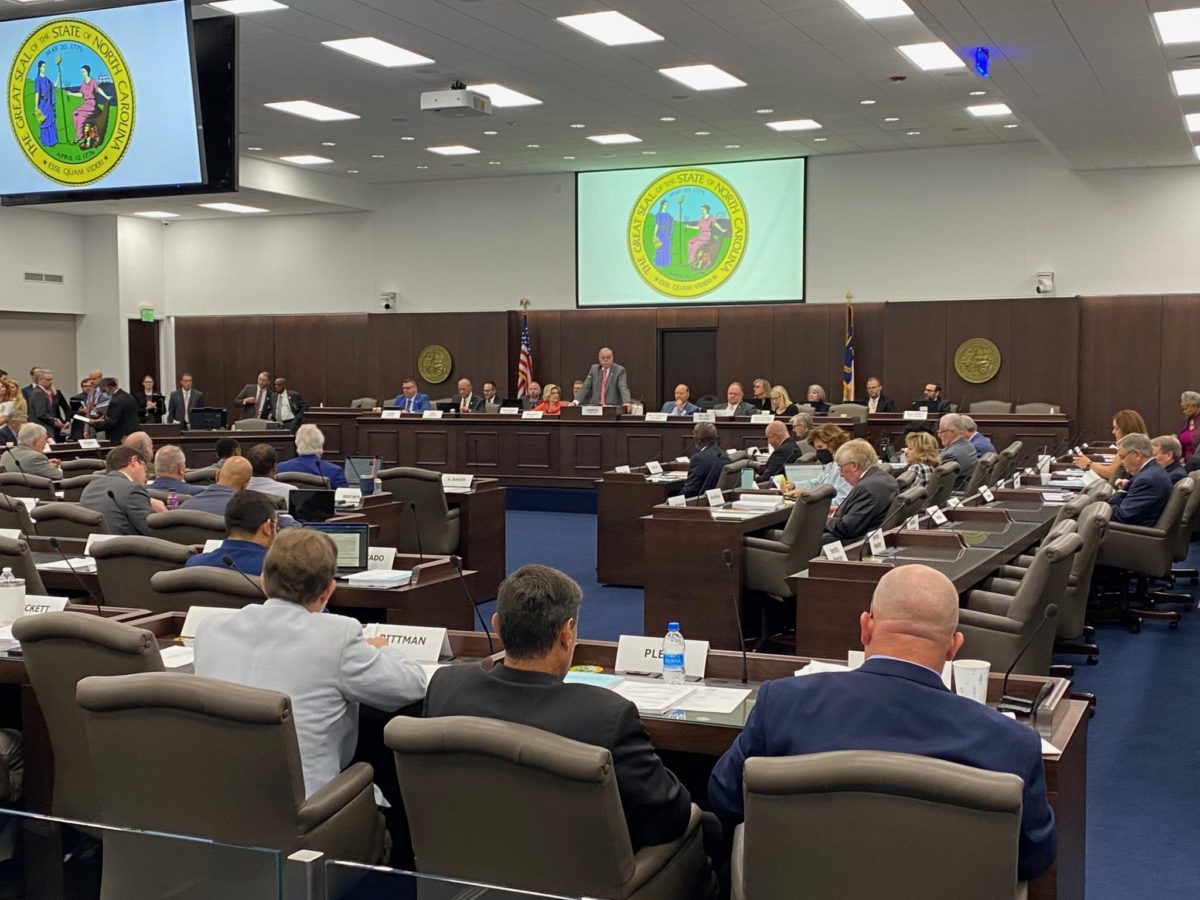 Update 11:48 a.m, Friday July 1.: The budget has passed both chambers and is on now to the governor.

In the final week before the end of the fiscal year, the Republican-led House and Senate agreed to a budget compromise that includes a 4.2% average raise for teachers for 2022-23.

The long session budget last year included an average 2.5% pay increase in the second year of the biennium, so the newly proposed pay increase replaces that. Beginning teachers will now start out at $37,000 instead of the slightly more than $35,000 they previously got.

“The beginning teacher increase with the inflationary pressures and the job market issues, I think that’s a big step forward,” said Rep. Jeffrey Elmore, R-Wilkes, in a press conference Tuesday.

Here is the old one:

The budget also includes a new teacher bonus program that ties the payout to the teacher’s student growth scores.

In addition, non-certified staff, like bus drivers, will get either a 4% pay increase or their pay will go up to $15 an hour. They will get whichever is more.

While teacher pay is always the highlight of any budget, given the recent school shooting in Uvalde, Texas, this budget also includes additional money for school safety.

The legislature is putting $32 million into the School Safety Grant program, including money for school safety training and safety equipment in schools. Additionally, lawmakers are giving public schools $15 million for the School Resource Officer Grant program, focusing the money on elementary and middle schools. The plan also increases the state match. Previously the state gave $2 for every $1 provided by a district. This plan ups that match to $4 for every $1.

Another $26 million will go to an allotment to help districts provide one School Resource Officer for every high school.

One of the most novel aspects of the long session budget was a plan to distribute $100 million among school districts to provide local supplements. The money was distributed to localities with an emphasis on those districts with fewer resources to provide their own local supplements. The new budget ups the funding on that plan to $170 million total.

One controversial measure championed by Republicans is the opportunity scholarship program, which gives state funds for students to attend private schools. It began as a program directed at the state’s poorest students, but over time lawmakers have expanded which students are eligible for the program. Opponents often refer to it as a voucher program.

In the new budget, lawmakers put $56 million into the opportunity scholarship grant reserve and expanded income eligibility to 200% of the amount students need to qualify for free or reduced-price lunch.

One big concern from the State Board of Education and the State Department of Public Instruction (DPI) are the rising costs of fuel for school transportation. The budget provides $32 million for a transportation fuel reserve that DPI can use to help districts who need assistance. The money for this is non-recurring.

Last year’s budget bumped the reimbursement rate child care centers get for NC Pre-K  by 4% over the biennium. The new budget increases that by another 5% for a total increase of 9% in 2022-23.

According to EdNC early education reporter Liz Bell, “The bump in the rate is aimed at closing disparities in teacher pay between settings. Centers have long struggled to retain teachers and the pandemic has exacerbated the issue.”

The budget taken up by lawmakers this week does not include a hold harmless for 2022-23.

The long-running Leandro court case is currently sitting at the North Carolina Supreme Court, and it will ultimately decide if a judge’s decision to force the state to turn over $1.7 billion to fund the plan was proper or not.

Meanwhile, Every Child NC, a group that advocates for the multi-year Leandro plan which seeks to get the state in line with its constitutional duty on education, said on Twitter that the budget funds about half of what is called for in the plan.

Sen. Phil Berger, R-Rockingham, was asked at a press conference Tuesday whether Leandro was part of lawmakers’ consideration as they put the budget together.

“I think what we did is we looked at what the requirements are for funding public education in North Carolina and we appropriated dollars to do that,” he said. “How that matches up with what a nonprofit from California determined was an appropriate amount, I cannot say.”

The reference to the California nonprofit is about WestEd, the organization that initially developed an action plan to help the state get in alignment with its constitutional duties.

A protest aimed at getting lawmakers to address Leandro occurred outside the General Assembly while the budget was being heard by lawmakers in a joint appropriations committee.

The budget also, however, decreases funding for community colleges across the state by a little more than $12 million dollars to account for the decrease of 2,009 “full-time equivalent students” at community colleges.

There is also some money in the budget for myFutureNC, the organization in charge of helping the state move towards its attainment goal “that by 2030, 2 million North Carolinians have a postsecondary degree or credential.”

In addition to a $250,000 grant directly for the organization, there’s $500,000 for an interoperable student data systems study fund, and $160,000 for a national student clearinghouse data fund.

The budget provides funding to ensure that students qualified for reduced-price lunch can eat for free.

In addition, in line with DPI’s push for the science of reading to be incorporated into reading instruction, the budget gives money for 124 literacy coaches and early learning specialists. This is something the State Board of Education and DPI were advocating for.

Infrastructure is also a big concern for districts around the state, with billions needed statewide to repair and construct school buildings. The budget takes $431 million from the North Carolina education lottery over the biennium and puts it into the Needs-based Public School Capital fund.

In total, lawmakers are providing $29.2 million in 2022-23 for Cooperative Innovative High Schools.

Feminine hygiene products will become easier to access for students under the budget. The budget includes a recurring $250,000 so that schools can get grants to provide such products.

The pilot of the state’s two virtual charter schools — which have been persistently low-performing — was extended two years through the 2024-25 school year.

The budget was taken up in a joint appropriations committee today, but only for discussion. Since the budget was done as a conference report, no amendments can be added and it will only receive a yes or no vote when it reaches the floor of the House and the Senate. This article will be updated as the budget moves through the legislative process. Perspective | The Build Back Better Act, state budget, and Leandro: Opportunities for young children in 2022