Sounds of hope in Swain County

Sounds of hope in Swain County

“Can art bring about hope?” is something I ask all the time to students. When EducationNC visited Swain County High School’s band room at the end of this school year, it was the question I ended my interviews with. The students went on to describe the piece “Kyiv 2022,” and how they performed it at the school’s spring concert.

Brian Balmages wrote “Moscow, 1941” to musically tell the story about the German invasion of Russia during WWII. His piece, which was written in 2006, is inspired from elements of the famous Russian song “Meadowlands,” and depicts how the Red Army defended the country’s capital against Axis power.

Following the 2022 Russian invasion of Ukraine, Balmages again picked up his pen and began composing a piece to describe what was happening in real time in Eastern Europe. The work, which Balmages calls a sequel to “Moscow, 1941,” is entitled “Kyiv, 2022.”

In a Facebook post, Balmages says he is flipping the narrative and is infusing the Ukrainian National Anthem and the song “Prayer for Ukraine” in his new work to represent the Ukrainian people fighting against Russian invasion.

All proceeds of the initial release are going to relief organizations on the ground in Ukraine. He can see school bands playing both pieces, and hopes it leads to conversations about history, humanity and culture.

Senior Jacob Dunford said the composition included melodies that are important to Ukraine, and it emotes the feeling of pushing through the darkness.

“There’s so much hope in that piece,” he said.

Jaxon Payne-McCullough, a senior and brass captain of the marching band mirrored Dunford’s sentiments. “If somebody’s feeling courage, when they’re writing something, a piece sounds really strong, hearing that will make you want to be strong,” he said.

Band director Karen Williams-Lanning is a 19-year music educator. She said she introduced the composition to her class so they could realize music doesn’t just live in their band room, that music is this life.

“It is all around us, and in everything you do. You don’t even know it, and we can be better people because of it.”

Makings of a music program and community

What gives this band director hope? With out a doubt, her students. “They’re gonna run the world,” she says. “They’re going to be in charge.”

Williams-Lanning grew up in nearby Waynesville, started playing piano in kindergarten, and picked up the saxophone in school. She loved music as a kid and knew she wanted to teach. After attending Western Carolina University, she completed her student teaching in Swain County and never left.

She was the middle and high school band director, but the program became so successful under her tutelage that the school was able to split the program and get another instructor. Some of the 2022 seniors are students she taught in sixth grade.

These accolades sometimes catch people off guard considering the school’s size of about 500 students. Superintendent Mark Sale believes Williams-Lanning to be one of the best teachers out there.

“She is a master educator that is not performance or ego driven, but is a student centered educator.”

More important than any trophy to Williams, is the community created and cultivated in her band room. “It’s the family atmosphere, it’s the camaraderie, it’s the trust” that she likes most about her job.

Her students feel that way too. Check out what some Swain County High School seniors have to say about their band class, what they think about hope, and why they enjoy playing music in school so much. 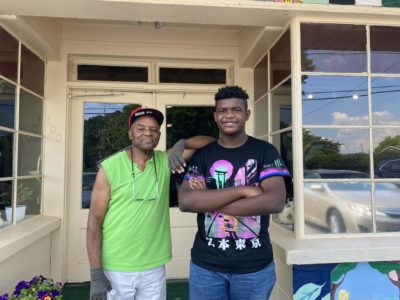 AIMing to cultivate creative thinkers across the state through art