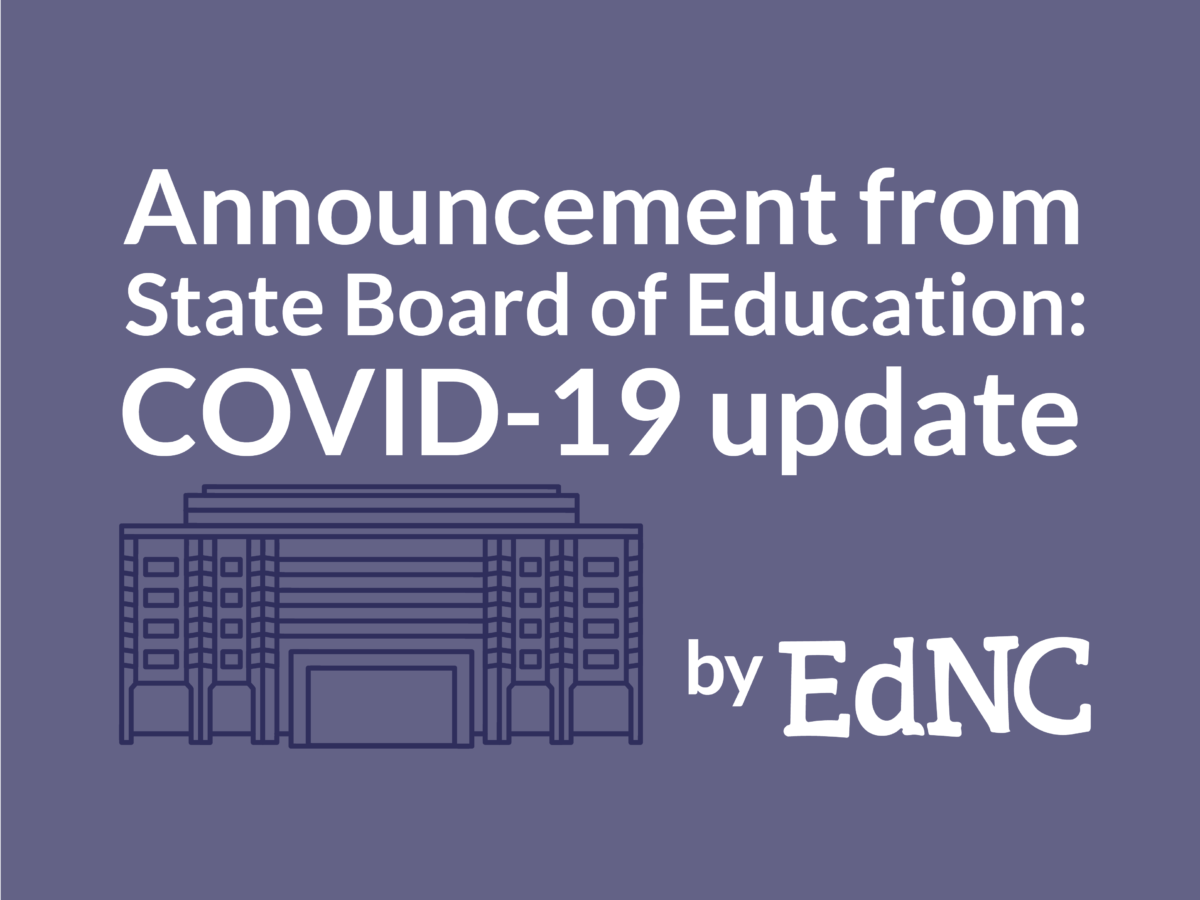 The State Board of Education revisited its plan on senior grading this week but ultimately decided not to make any changes after an extensive discussion.

Because of COVID-19 and the fact that schools are closed for in-person instruction this spring, the Board approved a policy in March that would let seniors forgo grades in favor of a pass or withdrawal given their status as of March 13. If a student was failing as of that date, then he or she could spend the remainder of the semester trying to get their grade up to passing through remote learning.

At State Board meeting last month, questions were raised about why seniors who wanted a numerical grade couldn’t get one, just as students in grades 9-11 can.

The presentation this month looked at the thinking that shaped the grading policy around seniors.

David Stegall, deputy superintendent of innovation at the state Department of Public Instruction (DPI), said that there were three goals the department had in mind when developing the policy.

“So much change was happening so quickly, we wanted to relieve the anxiety of grades,” Stegall said.

And third, the department was responding to an outcry asking for a statewide policy that didn’t give grades.

Stegall said that the policy passed in March was well received by charter and traditional public school leaders as well as districts. He also said that state colleges and universities agreed they wouldn’t use grades from the spring semester when making decisions about students.

Sneha Shah-Coltrane, director of advanced learning and gifted education at DPI, said that DPI was not recommending a change to the original State Board plan.

“We do anticipate there may be many students who believe that if we were to change the policy at this point, we essentially change the rules of the game midway,” she said.

State Board member Olivia Oxendine was one of those who pushed back against the policy last month. At this week’s meeting, she again challenged the plan, saying that while most seniors may have been accepted to universities already, there are likely some who won’t apply until later. She said she has been receiving letters about this issue.

“We have a body of students out there who are trying to get under the wire with a stronger GPA,” she said.

She also said that in her role as a college professor reviewing transcripts, a “pass” or “P” grade doesn’t have the same significance as an actual letter grade.

“I know to an admissions officer and college administrators who review transcripts … a ‘P’ is not as informative nor as persuasive as a letter grade. A ‘B’ matters. An ‘A’ matters more. A ‘P’ does not,” said Oxendine.

State Board member James Ford pushed back last month against a policy that allowed some students in grades 9-11 to take numerical grades if they wanted. At this week’s meeting, he said the State Board should have originally approved a blanket policy that applied to all high school students, though he wasn’t going to recommend changing the current plan.

State Board member Amy White, on the other hand, said she thought the State Board should consider making a change. She said she can’t see how one student choosing a grade affects another student’s choice not to.

“Both choices are just that. They would be choices,” White said. “We have spent millions and millions of dollars on students who are academically challenged because we believe that education is the fundamental building block of success … in this particular case, we have the chance to do something that is right that won’t cost our state any additional dollars.”

White also read a statement from Lt. Gov. Dan Forest on the subject. In it, he said a grade could determine scholarships, whether students get accepted to universities outside of North Carolina, or even if they become valedictorian.

“This to me is a no brainer,” Forest said in the statement. “As it does nothing to hurt a student but can definitely make all the difference in an already hectic end of high school career for those students who want the grade that they earned.”

Stegall said that if the grading policy were changed, it would be difficult to implement since seniors have already likely been making decisions under the assumption that their only option was to take a pass or withdrawal.

“We told them that was their choice,” he said.

Ultimately, the Board voted to reaffirm the original policy, meaning that seniors will not be able to get grades. Oxendine, White, and Board member Todd Chasteen all voted against reaffirming the policy.

Graduation ceremonies up to districts

DPI has released guidelines around holding graduation ceremonies, and it seems the ball is in districts’ court as to whether they want to hold an event.

According to the guidelines, local school boards and superintendents get to make the call.

“Districts and schools are encouraged to engage with students and families on the best solutions for their communities. Plans should include consultation with local public health officials on current state and local public health requirements and other questions related to health and safety,” the memo states.

“Additionally, districts and schools should seek guidance from their local board attorneys and local law enforcement during the planning process. If local school leaders elect to hold graduation ceremonies, then those ceremonies must comply with requirements of applicable Executive Orders in effect at the time of the event.”

The guidelines also include a number of examples of non-traditional graduation ceremonies that districts may consider.

“Drive-in:​ Families may arrive and remain seated in cars, which allows for minimal physical engagement. This can be done at movie drive-ins, large parking lots (like malls), or at other similar venues. Weather considerations related to heat and rain should be addressed, especially as all cars would need to be turned off in order to conduct the ceremony. Safe walking pathways should be outlined for graduates to exit their vehicles and safely collect their diplomas. Similarly, large projected screens and sound equipment may be required. Consideration should be given for students and families without access to vehicles.”

“Drive-through:​ Similar to above, families may arrive and remain seated in cars, which allows for minimal physical engagement. A pre-recorded or live ceremony could be broadcast (which will require sound, broadcast, and/or radio equipment). At the conclusion of the ceremony, cars would proceed through a predetermined course that allows the graduate to drive-through and collect the diploma. Students could either remain in the vehicle or exit the vehicle and follow an outlined path to safely collect their diplomas.”

“Individualized Ceremony:​ Schedule students to arrive in predetermined and specifically timed waves to enter the building and collect their diplomas. Currently, no more than ten (10) individuals are permitted to gather. This strategy requires district or school officials to identify the number of individuals from the school who will present the diplomas, take photographs/video, and how many guests can accompany the graduate into the facility. This strategy requires precise scheduling and traffic control to facilitate entering and exiting the building in order to comply with mass gathering regulations.”

“Hybrid/Video:​ Districts or schools deploy one of the strategies listed above while also recording the graduates receiving diplomas. Video is spliced and the entire graduation is provided on-demand or aired at a predetermined time.”

State Board of Education Chair Eric Davis said during this week’s State Board meeting that graduation is an “important milestone” for students.

“Unfortunately, due to the worldwide pandemic, many of our seniors may not get to experience the usual pomp and circumstance this year,” he said. “Undeterred, our districts and school leaders are formulating creative ways for students to celebrate completing high school.”

The full memo contains a number of other tips and recommendations. Read it in full below.

Gov. Roy Cooper announced this week that up to 280 more school buses in the state will be getting mobile Wi-Fi due to donations from AT&T, Google, and Duke Energy Foundation. The first installment of 156 devices were planned to start arriving Wednesday in 29 counties, according to a press release.

“In many communities, school buses are already delivering meals to students and their families. Now they’re delivering Wi-Fi for online learning,” Cooper said in a press release.

The following counties are receiving the first 156 deliveries.

“We appreciate this generous support for our districts that need it most,” state Superintendent of Public Instruction Mark Johnson said in the press release. “We will face many challenges, but working together, we will come out of this crisis stronger.”

“The State Board of Education works to ensure digital equity for the state’s public school students. This partnership with AT&T, Google and the Duke Energy Foundation will allow more access for some of our most underserved counties,” Davis said in a press release. “The Board’s ultimate goal is to eliminate the digital divide to allow the same access for each and every child. These Wi-Fi hotspots are a start to getting these counties the resources they need to serve students despite their location.”

Read the full press release below.

Cooper also announced his week the creation of the DRIVE Task Force, which will work on improving “equity and inclusion” in North Carolina education. The group will ultimately submit a report to the governor with recommendations.

“North Carolina is committed to living up to our responsibility to deliver a quality education to every student in every county,” said Cooper in a press release. “This group of experts knows how to tackle the inequities across our state in order to ensure quality education.”

See the article below for the full list of task force members.

State Board of Education reports

The State Board of Education approved a couple of reports to the General Assembly this week. Perspective | Pandemic ready? One district’s response before, during, and after the COVID-19 crisis