Perspective | The reality of broadband in North Carolina

Welcome to our monthly feature on EducationNC called the NC STEM ScoreCard, written in partnership with the NC Science, Mathematics, and Technology Education Center (SMT) and the Burroughs Wellcome Fund. The previous edition of the STEM ScoreCard featuring MCNC can be found here.

The goal of the NC STEM ScoreCard is to build broader awareness of how P-20 STEM education is being nurtured across North Carolina and the impact on the well-being of our citizens and state. STEM used here is an acronym for Strategies That Engage Minds.

Strategic Investment in specific programs that increase the quality and impact of STEM education in North Carolina is a central focus of the NC STEM ScoreCard. One of those investments, so essential for STEM education, is in assuring high speed broadband access to students, educators, parents, schools, public libraries and higher education; thus, this month’s focus is on the NC Department of Information Technology Broadband Infrastructure Office. 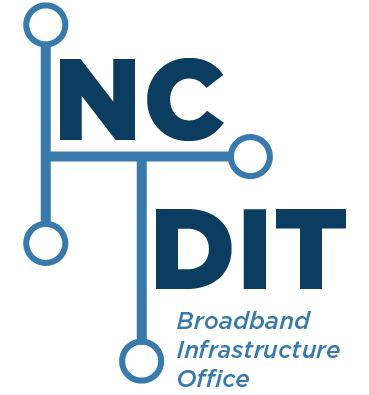 What is broadband and why is it important?

Another term used for bandwidth — or the amount of data that can be sent through a connection — to access high-speed internet. The more bandwidth, the more information a user can send or receive at any given time.

Why does speed of broadband matter?

Broadband speed is important because it allows for faster transmission (uploading and downloading) of data. Data is transmitted digitally, therefore text, images, and sound are all translated into “bits” of data.

Broadband is accessed through various high-speed transmission technologies, which allows these bits to move faster.

How is broadband accessed?

Broadband is accessed through a number of technologies including: 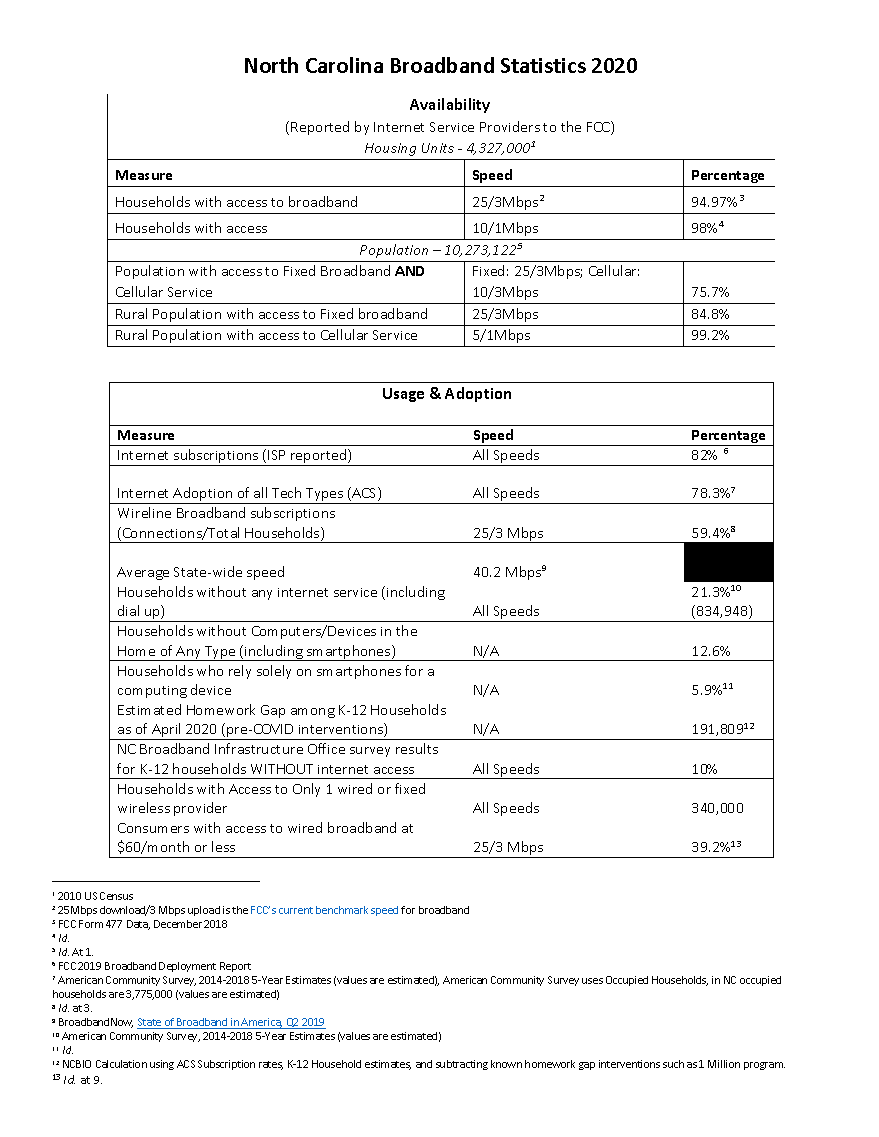 The FCC reports that 93% of North Carolina’s population has access to the internet at the FCC threshold speeds of 25 Mbps. Of those without access — nearly 640,000 people — live in sparsely populated areas.

As the map below shows, significant gaps exist in the state. Not surprisingly, these areas represent some of the state’s most economically distressed regions. Counties struggling with economic development, high unemployment, and aging populations correlate strongly with those with insufficient broadband infrastructure.

The issue is not strictly a rural one. It also persists where the population density or income levels are low, even in urban areas. Interestingly, there are many sparsely populated counties and areas in the state where residents in small towns and cities have access to next-generation, fast internet service at affordable, or competitive prices.

Individuals with lower levels of education, income, and who are elderly or disabled are less likely to adopt broadband. Research demonstrates that disparities by education and income are consistently larger than those observed by any other factor, including population density.

This suggests that even in areas where broadband is readily available individuals with lower levels of education and income are by circumstance choosing not to purchase internet services.

Broadband networks enhance educational experiences by providing students and teachers with access to an array of resources including text-based materials, photos, videos, music, animations, interactive lessons, and oral history collections. It also opens the walls of classrooms, allowing students to participate in distance learning opportunities anytime from any location they can access the internet, such as a library, school or home. Access to these resources is becoming increasing essential for schools, teachers, and students.

Two of the biggest hurdles to moving America’s schools online have been an inadequate number of digital devices for students and millions of families’ lack of high-speed internet at home. These gaps in basic technology access are particularly stark along socioeconomic lines.

What is the homework gap?

Greater than 50% of teachers report that limited access to online resources at home presents a major challenge to integrating technology into the classroom. Low-income homes with school-age children are four times more likely to lack broadband than middle or high-income families.

Nationally, seven in 10 teachers assign homework that requires internet access, but an estimated 5 million households with school-age children do not have internet access at home, according to research from the Pew Research Center in 2015.

From difficulty in completing homework to diminished educational outcomes, the consequences of the homework gap are vast and hinder future career and economic opportunities for both the students and their communities.

The need for granular data, coupled with the desire to address the homework gap holistically and systemically led the BIO and The FIRE Group to partner to conduct a pilot research study on the topic. The two organizations designed and piloted a survey to collect information on the homework gap, who it affects, and its primary causes for North Carolina households. This was at the core of  a comprehensive study and report generated by The Friday Institute, find the report here.

The homework gap report discusses many of these barriers and policy recommendations. You can learn more about those recommendation here.

The Connecting North Carolina State Broadband Plan also includes policy recommendations that are intended to reduce barriers as well. You can learn more about those recommendations here.

While data on North Carolina’s homework gap has some limitations, several data sets inform where the state sees the largest divide. The figure below shows the areas of the state with the highest percentages of students participating in the free and reduced lunch program overlaid with broadband adoption data.

Want to know more about internet speed in your immediate community and elsewhere? Go to the FCC site here.

1.What more needs to be done to maximize on the 2016 NC Broadband Plan to assure access for all students?

2. What additional policies could be enacted by the state to reduce or eliminate racial and income barriers to broadband access?

3. Are measures of the “homework gap” being used to increase connectivity and access in low-wealth schools and communities?  What more needs to be done to  critical infrastructure inequities in North Carolina?

A special thanks to Wes King, Director of Communications, Broadband Infrastructure Office, and North Carolina Department of Information Technology, for his invaluable assistance in constructing this report

Send questions and comments on the NC STEM ScoreCard to coble@tpanalytics.com