Reverend Paul Ford, senior pastor at First Baptist Church of Winston-Salem and board member of Action4Equity. Screenshot from press event.

Just days after the release of a Leandro action plan for 2021, a new education coalition has been unveiled.

Communities for the Education of Every Child NC is “calling on North Carolina to immediately and aggressively comply with its constitutional duty to provide a sound basic education to all children,” according to a press release from the organization.

The organization held a virtual press event Wednesday, featuring a variety of speakers who spoke to the issues at the center of the Leandro case.

Marcus Bass, executive director of Advance Carolina, said there are “many different reasons” why the coalition is launching now, including a pair of Democrat-led House bills that seek to address Leandro.

“We need to make sure we are providing solutions that bring together the community to support our children,” he said.

Here is how the organization describes itself on its website:

“Communities for the Education of Every Child NC is a community-led, statewide coalition of organizations, parents, teachers, and students who advocate for every child’s constitutional right to a sound basic education. Our work focuses on promoting equity so that race, ethnicity, economic background, regional location, disability, gender identity and sexual orientation, immigration status, and language are not barriers to educational opportunity.”

The meeting started off with a video message from Reverend Paul Ford, senior pastor at First Baptist Church of Winston-Salem and a board member of Action4Equity.

“Educational equity is and will be one of the defining issues of our time. Because it is still the case that too many … Black and Brown, Black and Brown and poor children, do not have access to, are not provided with the resources necessary to make sure they receive the sort of education that will enable them to prosper, to achieve, to meet the standards of excellence we know are so critical to success in this world,” he said.

Here is the full video.

Daisy Almonte, a recent Duke University graduate who attended and graduated from rural North Carolina public schools, said she is disappointed that rural schools aren’t more of a priority in the state. A Latina whose family are immigrants, Almonte said she didn’t even realize that her high school had a lack of resources until she got to college and heard from classmates about what opportunities they had in high school.

Almonte persevered and went to her dream college (Duke), she said, and she is attending Harvard Law in the fall. But she ended her talk by referencing the student whose name became the standard bearer of Leandro.

“I had a conversation with Robert Leandro last week and we lamented the many similarities between our experiences despite all the time that has passed,” she said.

Letha Muhammad, director of the Education Justice Alliance, called on the General Assembly to act to address the shortcomings highlighted by the Leandro case. In particular, she said lawmakers should pass the two Democrat-led House bills mentioned above. She said that meeting the needs of all students is going to take a “radical imagining” of how the state conducts and funds education.

“There’s an opportunity here for our General Assembly to answer the call of this reckoning,” she said.

Mark Dorosin, a managing attorney with the Lawyers’ Committee for Civil Rights Under Law, is involved in the Leandro case. He referenced the 2021 action plan submitted to the court this week, which proposes additional education spending of almost $427 million next fiscal year. He noted a number of points contained within the proposal, including:

The next step, Dorosin said, is ensuring the General Assembly meets the proposals from the action plan.

“Now is the time to … turn to the legislature and say we have a plan … Legislature, we’re calling on you to make the decisions to put the money there and fund these programs,” he said.

Last year and early this year, a report (WestEd) and consent order laid out how the state can ensure that all students in North Carolina have the opportunity for a “sound basic education.”

Here is the Leandro action plan — released June 16 — from both parties in the case addressing what the state needs to do next year, including detailed recommendations that would necessitate an additional investment from the state. 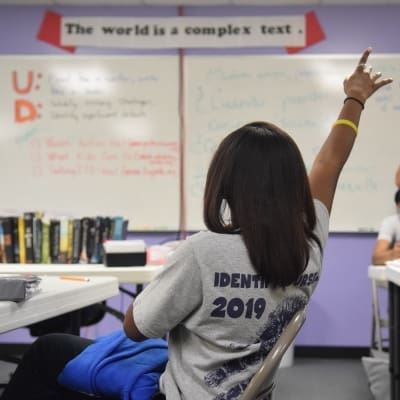