Music teacher Alice Cashwell and her students at Beaufort Elementary School in a selfie she shared with Principal Karen Wood. Courtesy of Karen Wood.

When Beaufort Elementary School Principal Karen Wood woke up on Friday, March 18, she was looking forward to having lunch with her school’s music teacher, Alice Cashwell.

Cashwell had been undergoing aggressive treatment for pancreatic and liver cancer since September, and Wood missed spending time with her. They were always discovering new ways their lives had intersected growing up in Cumberland County, even though they didn’t meet until Wood hired Cashwell as a lateral entry teacher in 2018.

But that morning, Cashwell was feeling unwell. She canceled lunch with Wood to see her doctor instead. By the end of the day, her doctor had recommended she make plans to enter hospice.

Wood was devastated. Helping students grieve the death of a teacher had not been part of her plan for the school year. “I’m a problem solver every day,” she said later, “but in that moment I’m like, what am I supposed to do?”

Such moments of crisis are more familiar to Boston, director of student support services for Carteret County Public Schools. Just five weeks earlier, she had guided her team of school psychologists, counselors, and social workers to help students cope with the trauma of a plane crash that killed eight people.

Four of those killed were students at East Carteret High School. They were part of a small cohort of kids who had gone to school together since kindergarten.

“The reality is that in schools, there is always the next crisis,” Boston told EdNC.

Cashwell’s doctor had estimated that she had about two weeks to live. That meant there was urgency, but Boston also wanted to make the most of that time.

“So I was thinking about this gift of time and how we might be able to front-load students with skills in order to help work through grief and loss,” Boston said.

She began looking for lessons to “pre-teach” grieving. What she found was that most lessons about grief are designed to be used after a death, not before.

But she did find a set of lessons designed to prepare students for talking about death by starting with more familiar concepts and working up to grief.

Using this framework, Boston worked with Candace Hunt, the school counselor at Beaufort Elementary, to quickly design a curriculum for pre-teaching grief.

‘She makes every kid feel special’

Everyone knew Cashwell’s loss would be hard. The Seadogs —  Beaufort’s students — had a special bond with her.

One week after their canceled lunch, Wood visited Cashwell in hospice.

“As I sat with her in her bedroom, she said more than once, ‘I’m worried about their little hearts,’” Wood recalled through tears.

While Cashwell was in hospice, her colleagues talked about her connection to students’ hearts as if she was still right down the hall.

“She takes an interest in every student whether singing is their passion or not,” said Laura Frisbee, a kindergarten teacher at Beaufort and mother of two students there. “She makes every kid feel special.”

At the beginning of the COVID-19 pandemic, when students were learning remotely, Cashwell sent individualized, hand-written notes of encouragement to each student’s home.

A ‘toolbox’ of ways to cope

Boston and Hunt met with the school’s staff on Monday, March 28, to share the curriculum they had designed. Teachers taught the lessons on Wednesday, Thursday, and Friday — less than two weeks after Cashwell entered hospice.

Instead of making the lessons specifically about Cashwell, the counseling team took a more general approach to the idea of grieving a loss. They wanted the students to be able to apply what they learned to any situation they might encounter in the future.

The first lesson was about recognizing and identifying feelings, including how they might manifest as physical sensations such as stomach pain, shortness of breath, or muscle tension.

The second lesson introduced the concept of loss, asking students whether they had ever lost something or someone they cared about and what that felt like.

Frisbee, after teaching that lesson, talked later that day about her kindergartners’ experiences with loss. One student talked about a dog running away. Another brought up losing a favorite toy.

“Just in my room, two grandparents passed away this week,” she added.

For the third lesson, Boston provided teachers with grieving strategies they could share with students. More importantly, students were encouraged to share their own experiences and think about what brings them comfort. Teachers collected those ideas and shared them with Hunt, who then compiled a spreadsheet of student-centered strategies and distributed it to the staff.

Wood described this spreadsheet as a toolbox filled with tools that students and teachers could pull out and use as needed.

Kindergartners suggested strategies such as taking deep breaths, drawing, and playing on the swings. Fifth-graders proposed crying, crocheting, and exercising.

The lessons also fit into the social and emotional learning that the Seadogs had already embraced. That meant there was time in the schedule to teach the lessons, and the students were already familiar with the language of emotions.

Alice Cashwell died on April 17, 2022, during the district’s spring break.

Boston and Wood had prepared a communication plan to inform staff, parents, and students about her death. This included a guide for how to tell children someone has died, and a video reading of The Goodbye Book, which was part of the pre-teaching grief curriculum.

When students returned to school the following Monday, their teachers were ready with the toolboxes filled with coping strategies.

“[Grieving] is a skill that every child will need at some point in time,” Boston said.

Wood acknowledged that this won’t be the last time students need these tools, and she said they’ll be better prepared the next time. Those skills are one more thing Alice Cashwell has left in her students’ hearts.

“To me, this is a living legacy,” Wood said. 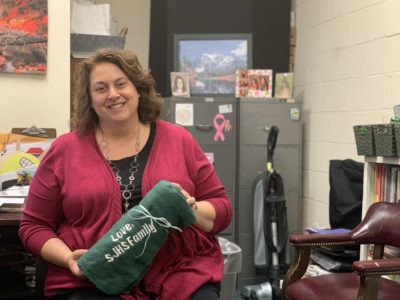