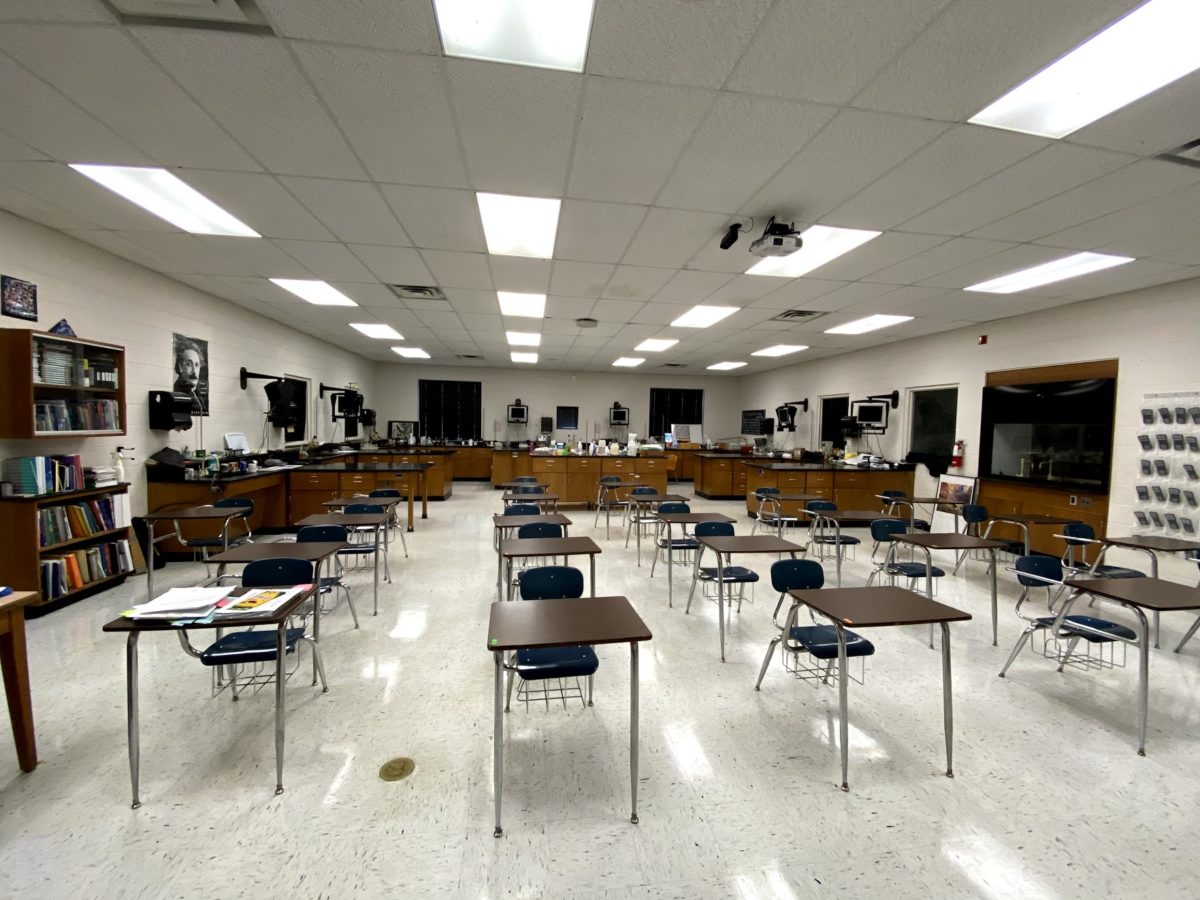 An empty classroom during the COVID-19 pandemic in November 2020. Caroline Parker/EducationNC

Editor’s note: On Wednesday, Feb. 10, Gov. Roy Cooper announced that teachers will be at the front of the line when the state opens up vaccinations for Group 3. Starting Feb. 24, pre-K-12 teachers, child care workers, administrators, and other support staff at public and private schools can start getting the vaccine.

When Rob Jackson, superintendent of Carteret County Schools, heard last Monday that Gov. Roy Cooper had set a meeting for the following day alongside State Superintendent Catherine Truitt and State Board of Education Chair Eric Davis, he was excited.

Carteret was already operating elementary schools under plan A — all students back in schools with minimal social distancing. Middle and high schools were operating under plan B, which is a hybrid of in-person and remote learning that requires 6 feet of social distancing in schools. Jackson thought that the social distancing requirement was about to be loosened, and he spent last Tuesday working with district staff to figure out how to implement plan A in Carteret’s middle and high schools. There was even a local board of education meeting that night where he was planning to present on moving all schools to plan A.

But then Tuesday came.

“As the governor’s press conference unfolded, we realized that that wasn’t happening at all,” Jackson said, adding later: “We very quickly realized that for our school system there was no change made. We were already doing what we were allowed to do.”

Jackson isn’t alone. District superintendents around the state had a variety of reactions to the governor’s announcement, and for some of them, confusion reigned. District leaders who thought state Department of Health and Human Services (DHHS) guidelines were changing found out instead that there was nothing they could do after the governor’s press conference that they couldn’t do before.

And that’s what Jackson had to tell his local board of education last Tuesday night, rather than presenting a plan to bring middle and high school students back under plan A.

“We were disappointed that we couldn’t send our students back yet,” he said.

‘What do you think that was about?’

Cooper gathered with Truitt and Davis last Tuesday and urged schools to bring their students back for in-person learning. Along with the press conference came an update to the DHHS toolkit for dealing with COVID-19 in schools. But the updated guidance didn’t change a key restriction when it comes to students in middle and high school: maintaining 6 feet of social distancing. Without relaxation of that key requirement, most districts can’t bring back middle and high schools under plan A.

It was Cooper who closed schools last spring due to the COVID-19 pandemic and allowed them to reopen this fall under either plan B or plan C (all remote). Later in the fall, he allowed elementary schools to open under plan A.

But since then, there hasn’t been any further change to what districts can and can’t do. Superintendent Patrick Miller of Greene County Schools said he realized pretty quickly that Cooper was talking to the districts that were still operating on a remote-only plan during his press conference last week. Cooper said then that at least 90 of the state’s 115 districts are providing in-person instruction for some or all students.

But not everyone in Miller’s community understood what Cooper was trying to say.

“It wasn’t very clear,” Miller said. “Even my board chair called me and said, ‘What do you think that was about?’”

Greene County has been on plan B since the start of the school year. Recently, the district let 300 students from its virtual academy to come back to classrooms on plan B, but now they’ve maxed out their capacity while still operating under the current DHHS guidelines.

Dare County Schools, on the other hand, has been fully remote since mid-November. Prior to that, the district operated under a hybrid model for grades 6-12 and plan A for elementary schools, but only since mid-October. A few weeks later, the district had to pull all students out of classrooms, according to Superintendent John Farrelly.

He said by the first week in November, there were almost 100 staff who were either quarantined or had lab confirmed cases of COVID-19.

“That really put us in a position where we couldn’t sustain staffing, and that’s with even going deep into our substitute teacher pool,” he said.

Farrelly said he’s all for “pressing ahead to the best of our ability.” He said he recognizes the achievement gaps that have come as a result of remote learning. However, he said that staffing challenges have to be taken into account when telling schools to bring students back.

Public Schools of Robeson County is another district that has been operating under plan C, or remote only. And following the governor’s press conference, Superintendent Freddie Williamson said he is getting ready to recommend to the local board of education that the district go back to in-person learning. However, he said this move has been a while coming.

Robeson is facing challenges not just because of COVID-19, but also because of the lingering effects of hurricanes like Matthew and Florence. Students need to get back in school in order to address the damage done.

“From our standpoint, it’s critical, because for Robeson, the slide is more than last March,” Williamson said, adding later: “We have a lot of work to do to attempt to catch kids up.”

For Kim Morrison, superintendent of Mount Airy City Schools, the governor’s announcement made no difference. Her district already has all its students in school five days a week.

But that’s because her district has enough space to have all of its students in person and maintain the 6 feet of required social distancing. The district is utilizing cafeterias and gyms, and the buildings are old and have larger classrooms, she said.

But Mount Airy is the rare district that can bring all students back and still maintain social distancing under current DHHS guidelines. For most districts, bringing all middle and high school students back and keeping them six feet apart is an impossible task.

“We don’t have room in any of our classrooms … to have all of our students back and keep them six feet apart,” said Watauga County Schools Superintendent Scott Elliott.

He said he, too, expected that the governor was going to announce a significant change last Tuesday to COVID-19 requirements in schools.

“I was left feeling confused and frustrated by the conflicting messages that we are receiving,” Elliott said.

His district is in plan B and is in the process of moving toward plan A in grades K-5, where it is allowed. But he said the district is moving carefully and deliberately to ensure that it stays in line with DHHS guidance.

“We think we are doing exactly what the governor and DHHS expects,” Elliott said. “If they expect something different, then they need to change the rules that we are expected to follow.”

Here is what Cooper press secretary Dory MacMillan had to say in response to inquiries from EducationNC for this article.

“The Governor encourages school districts statewide to return to in-person instruction under DHHS health guidance in response to the pandemic, including six feet of social distancing for students in grades 6-12. Research shows that schools can open safely if these proper safety measures are in place,” she wrote in an email.

Cooper’s announcement came on the same day that a Senate education committee gave a favorable vote to legislation that would require schools around the state to open for in-person learning. The bill would make schools open for exceptional needs students under plan A, and under either plan A or B for all other students. No school would be able to offer plan C. Families who want their students to remain fully virtual would still have that option.

Given Cooper’s press conference and the movement around the Senate bill (which is scheduled for a final vote in the Senate Tuesday, Feb. 9 before moving to the House), some are arguing that teachers need to be moved up the vaccination list.

“If Governor Cooper feels so strongly about resuming in-person instruction quickly, then he should support educators and immediately bring the full weight of his office to bear to get all educators vaccinated by the end of this month, just as 25 other states have been able to do,” she said in the statement.

And a statement from the Public School Forum of North Carolina last week said: “In order to reopen all public school buildings safely — and for the health and safety of those who are already working and learning in school buildings that have reopened — we must ensure that all educators and school personnel have prioritized access to COVID-19 vaccines, along with PPE, social distancing, cleaning supplies, ventilation, and student health checks, to ensure the safety of our educators and students.”

Teachers are in line after both health care workers and people over the age of 65 for the vaccine. They fall into the group of so-called “essential workers.”

Farrelly, in Dare County, said vaccinations of teachers is an equity issue. By the time March rolls around, every teacher in his district who wants a vaccine will have been able to get one. But he knows that’s not true everywhere.

“There are certainly equity issues from district to district in their ability to get teachers vaccinated and to get them in a position where they’re relaxed and feel like it’s safe to come into schools,” he said.

He thinks the state should coordinate a rollout of vaccinations to teachers to make sure distribution is more equitable. Miller of Greene County agrees.

“If we’re going to ask teachers to agree to come back, to work in rooms full of children that we call minimally social distanced … then we have to give them the option to get vaccinated,” he said.

But, he said the idea of waiting to bring students back until all teachers have been vaccinated is unrealistic.

“I think we have to come to grips with the reality that the current level of production and supply provided to our state, it just seems highly unlikely that our teachers will all be vaccinated any time soon,” he said.

Here is a link to a document the North Carolina School Boards Association is using to track what plans are being used by districts in the state.

Editor’s note: Patrick Miller serves on the Board of Directors for EducationNC.