It was a big week for education both in the halls of the General Assembly and at the governor’s mansion.

It started with Republican lawmakers rolling out a bill that would require schools to bring students back for in-person learning. Last March, Gov. Roy Cooper closed school buildings due to COVID-19, and things haven’t been the same since. He allowed them to reopen this fall under either plan B or plan C. Plan B is a hybrid model that is part remote learning and part in-person instruction. Plan C is all remote learning. Later in the fall, Cooper allowed elementary schools to open under plan A. In plan A, all students are back in the classroom and social distancing is minimal.

The legislation would make schools open for exceptional needs students under plan A, and under either plan A or plan B for all other students. No school would be able to offer plan C (all remote). Families who want their students to remain fully virtual would still have that option. The bill doesn’t apply to charter schools, only traditional public schools.

The legislation passed the Senate this week mostly along party lines. All Republicans and two Democrats voted for it. Those Democrats were Sen. Ben Clark, D-Hoke, and Sen. Kirk deViere, D-Cumberland.

Democrats on the floor seemed to agree with the premise of students returning to school but had problems with the details. For instance, Sen. Don Davis, D-Pitt, proposed an amendment that would limit middle and high schools to plan B. The amendment wasn’t adopted, but the crux of the argument behind it is that there is limited data in North Carolina on the spread of COVID-19 in these grades under plan A. That’s because no middle or high school has been able to operate under plan A since before the pandemic.

There is data, however, on the lower grades where plan A has been allowed. Davis proposed that middle and high schools could return under plan A when the state Department of Health and Human Services (DHHS) said it was safe to. All amendments by Democrats were defeated. The Senate has to vote on the bill one more time before it moves on to the House.

Cooper also announced this week his desire that students return to school, though he isn’t mandating it. Along with his announcement comes updated guidance from DHHS on bringing students back to school.

When asked whether he would veto the Senate bill on in-person learning, Cooper didn’t say. He did say, however, that he has concerns about the bill, including issues with the health guidelines. It’s likely he is talking about the part of the bill that allows middle and high school students back in classrooms under plan A, since there is minimal social distancing under that plan.

Meanwhile, Cooper also unveiled an emergency supplemental budget plan that includes $695 million in state spending. According to the December General Fund Monthly Budget Report — the most recent available — North Carolina has a little over $4 billion that isn’t reserved for any other expenses. In addition, the state has more than $1 billion in its savings reserve (rainy day fund).

Included in his budget proposal is:

These are all non-recurring funding proposals. Without a consensus revenue forecast, the state still doesn’t have a firm grasp on what money will be available for recurring expenses.

A press release said that Cooper will release his plan for a biennium budget later in the session.

Finally, a bill that extends the deadlines for parents to apply for $335 in federal COVID-19 relief funding passed both the House and Senate this week and now goes to the governor. Roughly $62 million remains in the pot of funds available for the checks, and those who were not able to apply by the December deadline now have until May.

Additionally, the bill allocates $39 million to the The Growing Rural Economies with Access to Technology (GREAT) Program, part of a deal struck between Cooper and legislative Republicans before the holidays.

The bill also includes about $1.6 billion in federal COVID-19 relief funds allocated by the federal government in the latest round of COVID-19 relief measures. This money largely goes directly to school districts — distributed through the state Department of Public Instruction — and lawmakers don’t have discretion on how it is spent.

Stay tuned next week for more news out of the General Assembly. 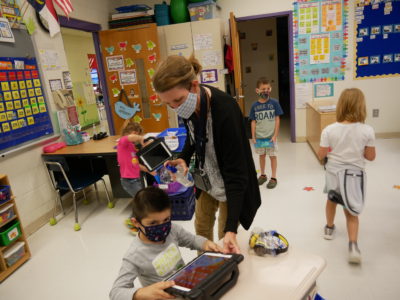