Skip to content
While some teachers rally in Raleigh, others opted to stay at home The N.C. GOP covered admission for all children during two shifts on May 16th while schools were closed for the teacher rally. Analisa Sorrells/EducationNC

While thousands of teachers from more than 42 closed school districts rallied and marched in Raleigh, some educators and policymakers opted not to attend.

State Superintendent Mark Johnson criticized the teachers’ decision to hold the rally during a school day, saying he would not attend. Johnson, a Republican elected in 2016, also pointed to the pay raises recently enacted by the Republican-led General Assembly.

“I absolutely support teachers, but I do not plan to attend a protest on a school day,” Johnson said in a statement. “We know it affects not only students, but also parents, hourly workers who work at our schools, and also other teachers who might not be taking part in that day.”

With teacher pay as one of the focal issues of the rally, Republican legislators created a website — ncteacherraise.com — that includes statistics on teacher pay, a teacher pay calculator, and state budgets since 2014.

During a press conference on the eve of the rally, House Speaker Tim Moore, R-Cleveland, and Senate President Pro Tempore Phil Berger, R-Rockingham, said part of the adjustment to the 2017 biennium budget will bring average teacher salary to about $53,600 next year. Berger said per-pupil spending will also increase but did not give specifics.

The North Carolina Association of School Administrators wrote a letter to legislators on Wednesday saying they did not endorse the rally either. The organization issued a statement urging school districts to remain open.

Teachers who did not make the trip to Raleigh cited reasons including the distance it would take to travel there, needing to catch up on work, needing to prepare students for their upcoming final exams, and feeling discouraged from going by their district.

“I had so much work piled up on my desk that I just took advantage of the fact that I wouldn’t have students and that would give me extra time to catch up,” said Denise Locklear, a school library media coordinator in Robeson County. “It wasn’t because I didn’t support the cause, but there were not many of my coworkers going — I knew of none — so I didn’t want to go.”

For Ben Owens, a teacher at Tri-County Early College in Cherokee County, the seven hour drive to Raleigh and final exams starting tomorrow prevented him from attending.

“Doing right by my students, I really felt like since the district wasn’t going to cancel school, I would have felt bad if I hadn’t been there the day before finals to assure them and give them confidence,” said Owens.

Jackie Baum Peterson teaches home bound students in Charlotte-Mecklenburg Schools, and often sees her students only once or twice a week. For one of her students who she only sees on Wednesdays, taking the day off would have been equivalent to that student missing an entire week of instruction — so Peterson decided to work.

“I made my phone calls, I’ve sent my emails, I’ve done my social media posts. I just know for some individual students I’m the only socialization some of them have outside of their family, and I felt like that was an OK reason to let me colleagues speak for me and advocate on my behalf,” said Peterson.

“I do not believe that this will resonate well with parents and citizens in WNC who see this as a partisan rally against Republicans. They expect teachers to be apolitical and see the raises we’ve received the last few years. For seven years of my teaching career my pay was frozen (the Democratic Party controlled all branches of state government at the time). I believe diplomacy would be a more productive approach.”

— A teacher in Buncombe County

“I’d like to participate, but I belong to a right-leaning red county, and the repercussions from parents and my school’s community would be harsh. I support my colleagues efforts, however, and will be contacting individual legislators.”

“It is the day before our school begins EOG testing. I feel that it would be doing a disservice to the students if we did not go to school the day before one of their big tests. They need consistency and normalcy before EOGs.”

— A teacher from Wilkes County

“I believe the rally is important; however, my first responsibility is to my students, particularly at this time of year. I have many seniors that are working as hard as they can to graduate, so I will spend my workday at the public library working with any students who are able to provide transportation and meet me. Yes, the poor pay, reduced benefits, and lack of resources over the past several years has hurt, but I can’t justify taking away the time and support I have promised to my students with only 14 days before state exams.”

— A teacher from Union County

“Our school district has already spent 3 weeks staying 20 minutes later every day to make up for snow. Now that we are going to be closed on the 16th we will begin to stay late and make up another missed day. Things like this contribute to the dropping number of students in public education.”

— A teacher from Buncombe County

The field trip must go on

Students at Carrboro Elementary in Chapel-Hill Carrboro City Schools take a trip to the mountains in fourth grade to learn about the geology and ecosystem of one of the three regions of North Carolina. This year, the trip was planned months in advance for May 16, with stops at Linville caverns, Linville falls, and Grandfather Mountain.

When Mike Henning, a fourth grade teacher at Carrboro Elementary, found out his district would be closed that day for the rally, he found himself in a conundrum. With contracts signed months ago, it would be difficult to reschedule the trip.

“Two of the teachers and myself came to the conclusion that we were going to do it for the kids anyway, even though we wanted to protest and support the cause,” said Henning. “We felt like we were doing that by supporting the kids today so that they were able to enjoy and witness this trip.”

With Wake County Schools closed for the day, the families of more than 600,000 students had to make alternative arrangements for students.

Emily Weeks, communications director for the North Carolina GOP, said the idea for the event came from NC Republican Party Director Dallas Woodhouse. Woodhouse, a parent himself, realized that a lot of other parents were likely facing the same child care dilemma that he and his wife were facing.

Weeks also emphasized that the event was not intended to be political. While elected officials were present during the morning session to talk with the media, no one spoke with parents and students about politics.

Anyone who entered Coconut Charlie’s was given free admission for the day regardless of political affiliation.

“It is just a fun activity that we thought would help, and it clearly did by the number of kids we had here,” said Weeks.

Staff at Coconut Charlie’s estimated that about 170 children came to the event during the morning session. 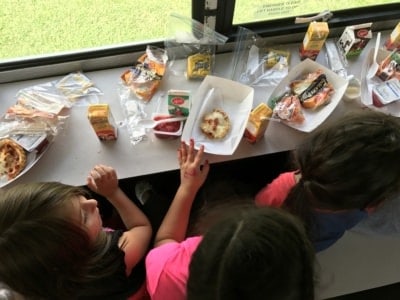