This is part 3 of a five-part series documenting the history of the Winton Triangle community and the C.S. Brown School. It’s a story about the struggles that befell a pioneering community and the values that survive all these centuries later to sustain hope for the future. Read the rest of the series here.

Bobbie Jones boasted about his school from the time he got there in 2017. C.S. Brown High School STEM was less than 10 years removed from not serving as a school at all, but rather as a temporary facility where other schools in the district sent students as a disciplinary measure.

“This is the best school in the universe,” Jones would tell his students.

Jones is a man with deep connection to the past and a love for students that goes deeper than test scores and grades. He called his school the greatest in the universe because he wanted students to know the halls they walked were special.

“And a lot of the kids snickered,” Jones recalled. “And I said, ‘I don’t know what y’all are snickering at. You better believe it.'”

Nobody would have laughed at such a notion throughout most of the school’s early history. Certainly not Dudley Flood or Michael Perry, who attended C.S. Brown in the mid-1900s. As the first standalone high school for African Americans in the state, they remember it as the center of a celebrated community and the generator of promising futures.

But those days, for the school and for the community, felt long ago even before Jones arrived as principal. C.S. Brown had lost significant enrollment as families left Winton in search of opportunity.1 In the 1970s, Hertford County Schools ceased using C.S. Brown as a high school, fielding only grades K-8.

Not long after, as enrollment continued to drop, the district stopped using it as a public school altogether. It became C.S. Brown Student Development Center and housed students from other schools for 45-day programs when they were in disciplinary trouble.

In 2008, the Hertford County Board of Education voted to make it a public school again, according to the Roanoke-Chowan News-Herald. It would be an alternative school. Rather than serve kids with disciplinary situations at other schools, it became its own diploma program for students at risk of academic failure and dropping out.

Even then, the values of the community’s and school’s founders remained embedded. As an alternative school, it became a lifeline for kids facing futures as high school dropouts. Still, it was far removed from the prestigious boarding school or dream school for locals that it was for most of its first 100 years.

Read the first two articles of the series on the Winton Triangle and C.S. Brown School 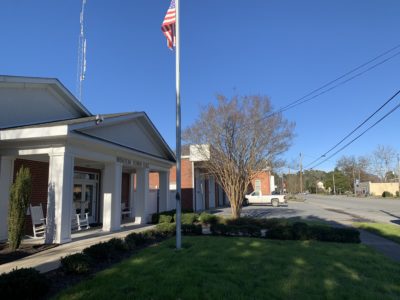 That was one of the biggest shocks for Perry when he returned to the area in 2012. Perry’s early childhood was during the waning days of Winton’s heyday.

“Those were special days, when you would go and spend the day in town,” he said. Main Street was bustling with shoppers and kids. The Chowan River nearby was still teeming with herring, and he would look forward to sitting on its banks with his friends and casting a line.

It was an era when, if people left, they always felt the call back home. Perry got the call, literally, to come back. That’s when the school board asked him to become superintendent in 2012. One of the first things Perry thought about when he got the offer was C.S. Brown.

The town was strong with nostalgia and he could feel the spirit of its enterprising settlers, Perry said, but otherwise he couldn’t recognize the Winton to which he returned. There were fewer things to do, fewer businesses, and fewer people.

“I thought I would be able to go back home,” Perry said. “But I quickly learned that you can go back to a place but you can’t always go back home. I found out that things were very, very different.”

Marvin Tupper Jones, a native and historian of the area, remembers seeing the changes in Winton, too. The entire region of Winton, Ahoskie, and Cofield had changed.

“I hate that kids now are leaving with a dislike of where they come from,” Tupper Jones said. “I was looking to go toward something when I left, not away from anything. Kids today want to get away from something.”

It was nowhere more evident than at C.S. Brown.

“When [the town] was bypassed and we lost all [those] businesses, families started leaving,” Perry said. “And through that and consolidation, the enrollment at C.S. Brown really suffered.”

The building seemed lethargic when Perry visited as the new superintendent — mostly unused, save a few classrooms.

“I think that was one of the things that, really, I was surprised by,” Perry said.

C.S. Brown was no longer formally labeled a school for Blacks, but its at-risk students were mostly Black. It was a symbol of the story education data tell about our Black youth now — recognized less for promise than for trouble.

Perry couldn’t stomach the idea of the school he revered reduced from a platform of excellence to a modern-day stereotype.

Community ties are strong in the Winton area. Many of the school board members grew up in Hertford County.

“There’s still a lot of people there who attended and graduated from that school,” Perry said. “There’s a lot of pride in what the school used to do. In fact, it’s one of the reasons I actually went back.”

Starting in 2011, revitalizing the school was a consistent agenda item at monthly board meetings, and members talked about it often in between.

When Perry returned, he remembers most of the discussion framed around what would set kids up best for the economy and world, which had changed around the Winton Triangle and left its young people at a disadvantage.

“The board members were very adamant that it would become a great school again,” Perry said.

In 2013, it became a STEM school, one focused on science, technology, engineering, and math. For the first few years, though, it failed to meet state expectations.

Early on, Perry said efforts to build the school back up focused on bolstering the STEM experience. He worked on setting up extracurricular opportunities with Nucor, the largest steel producer in the nation. Nucor had a major plant just a few miles away, near Cofield.

More recently, Bobbie Jones worked with professors at Duke University and East Carolina University to set up opportunities for students in science, healthcare, and geology.

“And what that did was it allowed us to draw some populations that had withdrawn, even from the public schools,” said Perry, who watched the school begin transforming before he left the district in 2015.

“And that was just one of the things that, yeah, I guess I was kind of proud of. Because we had to lay out some lifelines to bring people back into the public school, make them proud of the things that the school could do.”

A school focused on education beyond academic subjects

Local board members weren’t satisfied by simply establishing a STEM program in the area, Perry recalled. They wanted to honor C.S. Brown and its namesake.

Jones said that’s one of the reasons why the school’s curricula today emphasizes business skills, echoing the days when some of the state’s first Black entrepreneurs established stores in this community.

“And the bottom line is, all these connections relate to the real world,” Jones said. “So when you see these things going on outside of school, it’s no major shock to you. When you get to the real world, you think, ‘OK, I’ve seen this before. I’ve done this before.’ And I have failed, as an educator, if I graduate a child who doesn’t feel ready for that.”

In addition to the focus on academic turnaround, the school has emphasized connection and values. It’s a small school with enrollment under 100. While Jones says it could scale its model if it had building capacity for higher enrollment, he likes the family atmosphere it has now. He especially likes that he and his teachers can form close bonds with each child.

“I’m so thrilled right now that we can impact the lives of people, especially people of color,” he said. “To let them know that Black lives matter. And you can be special. You’re already special, but you can do something special to make your hometown even better than it is now.”

The community hasn’t been miraculously transported back in time. The school has come a long way toward regaining its former glory, though. Since 2018, the state has labeled it an ‘A’ school. Since 2017, C.S. Brown has graduated 95% of its seniors.

The turnaround is rooted in more than just academic excellence. It’s rooted in relationship.

“Mr. Jones is the most phenomenal principal,” said Daphne Lee, the school’s business teacher. “I tell him, ‘If you ever leave, take me with you.’ Because he’s so in tune with the students. He cares about a relationship with them. And you have to. You have to be in touch with the emotional needs, not just their academic needs. You have to be on that whole agenda with them.”

In August, the school held its graduation for the 2019-20 class. It had been a difficult few months, especially for the seniors whose final days in the school building — on that campus established 135 years ago — were stolen by the pandemic.

Jones watched as one student stood at the podium preparing to make her remarks. His thoughts turned back to when she and her classmates were new to the school and would snicker as he boasted about its greatness.

As she moved through her commencement speech, she stopped and looked right at the crowd. She spoke with authority.

“I’m so proud to be from the best school in the universe,” she said.

What he’s speaking now is that this school will graduate the type of leaders who will help change the community. And possibly the world.

Part 4. Can C.S. Brown be an economic engine for its community once again?