Teacher learns the value of sometimes scary communication with parents Teacher learns the value of sometimes scary communication with parents

When I began teaching, I was scared of parents. At 22, my first year teaching, a parent entered my fifth grade classroom for a parent-teacher conference. As I stood up to greet him, smiling and extending my hand to welcome him, he held up his hand, stopping me in my tracks.

“I am the CEO of my company. I hold three advanced degrees. What are you going to tell me about my son that I don’t already know?”

And with that, the conference was over. He turned on his heels and walked out, leaving me to ask myself that question over and over again: Who was I to tell parents about their children, individuals I had known but weeks, compared to the near decade that their parents had known them? What insights could I possibly offer that their parents hadn’t thought of tenfold?

Sure, I had in my hands the memoir Johnny wrote that described how he had always struggled with reading, but that he had been staying up late after his parents thought he was asleep reading aloud to his new puppy. Next to the memoir my notes from my conversation with Johnny detailed how Johnny knew he was struggling to pay attention in class, but he was just so tired. He had been afraid to tell his parents about his late night activities because bedtime was strictly enforced in their household, and besides, his brother told him talking to animals was “weird,” but he couldn’t stop because “Rover” seriously loved the book. And finally, I had his most recent independent reading assessment, marked with 100% and a “WOW! Great Job!,” punctuated with a promise that I would be sure to tell his dad how proud I am of him.

But what did I know, really?

With this fear, I soldiered on, operating under the mindset that my role was to influence my students in the classroom, but defer to their parents when it came to anything of concern inside or outside of my four walls.

My fourth year of teaching, we moved to North Carolina from New Jersey. I felt a bit more confident in my pedagogical skills, my license indicated that I was a “professional,” and I was ready to face the challenges of a new state. What I wasn’t ready for was the fact that my fear of engaging parents had followed me across state lines. So when I was stopped on the sidewalk by a parent of a student in my class one day after school, the familiar anxiety set in:

“Oh no,” I muttered, “prepare to be yelled at/berated/questioned/demeaned.”

And unfortunately, I was right. I stood there for eight whole minutes, while I was told in no uncertain, and quite voluminous, terms that while she liked how I was teaching, agreed with it even, she wasn’t sure that it was best for her child, and she was on her way to the principal to tell her all about it. As she stomped away, I was left to muddle through the confusion and hurt left in her wake, fighting back tears and wondering just what I did that merited her scorn, and why wasn’t I given a fair chance to sit down and address the issue.

Why couldn’t this parent, who self-proclaimed her trust in me, trust me enough to consider her concerns and seek a solutions-based answer to the current challenge? Where was the trust?

And so for years, I opted to shy away from parents. Limited interaction seemed like the best solution. If we didn’t communicate, I wouldn’t find myself in these negative situations. I could simply close my doors and teach.

But we all know it doesn’t work that way.

Students don’t exist in a vacuum.

As the years wore on, I began to notice more and more situations in the classroom that could be improved upon, if only I would get parents involved: Timmy isn’t turning in his homework. So I mention that I bet his mom won’t be happy when she finds out. I encourage Timmy to tell his parents, realizing as I do so that I’m asking a ten year old to willingly get himself in trouble because I want to avoid parent contact. Not the most effective course of action.

Or how about when the students met their reading goal and asked if they can have a class party. I want to say yes, of course, but I know that I don’t have enough money to buy snacks for the whole class. How simple it would be to ask parents to send in one item each to celebrate their students’ success, but that would mean parents having to drop the items off, or worse asking to come to the party to celebrate with us. How about extra recess instead?

Each year, I realized more and more how detrimental my fear of parental engagement was to my students’ success and ultimately my success as a well-rounded teacher, until finally, I decided to address it. I decided that parental engagement would be my personal Professional Development Plan goal. At that point in time, I felt confident in my curriculum knowledge, my pedagogical skills, and my classroom management. I was on numerous PLCs, my classes were consistently complimented by the specials teachers for their behavior, and my test scores ranked me as a “highly effective” teacher. By all accounts, I should have identified myself as a teacher leader, and yet, I still saw myself as needing to acquiesce to parents. Perhaps by engaging them more, I would feel more like the leader I was striving to be.

So I began seeking out every opportunity to include parents that I could think of from weekly email newsletters to phone reminder apps, classroom volunteers, parent/teacher conferences, and donations of time and supplies. I contacted parents about challenges and successes, about what we were already doing in the classroom, and what they would like to see us doing in the classroom. I made a schedule, ensuring that each month I talked to every child’s parents at least once, whether by phone, email, text, or in person. During classroom celebrations, I encouraged parents to join us, not just to drop off supplies, but to celebrate student achievements. Slowly, I added parent involvement to my list of classroom expectations and personal expectations for myself, making it a part of my classroom culture and professional conduct.

No longer afraid, I began to embrace what Rick Hess, author of The Cage-Busting Teacher, refers to as moral authority. Moral authority describes the leadership that comes when a teacher has the best interest of her students at heart, and when she works clearly and consistently with shareholders to professionally meet the needs of all involved.

For years I had been doing this, but it wasn’t until I sought to more actively involve parents that I recognized that I, too, had something worth saying regarding their student, that I knew their student in a way that they likely never would, and there was value in sharing that knowledge, even if the parent disagreed. I knew that I would still face parents who might have dissenting views, but I also trusted that building a relationship with those parents, and inviting parents to have a relationship with myself and my classroom, would encourage more productive conversations. I trusted that by embracing my moral authority I would be able to better engage all shareholders, and thus increase student success in my classroom.

The results were more far-reaching than I anticipated. I no longer felt tongue-tied when a parent vocally expressed their concerns, but instead, I found the words to respond professionally and productively far more easily. Rather than feeling attacked, I recognized the frustration that comes from limited experience — yes, they have known their child for 10 years, but their experience with 10 year olds is limited. Is their child experiencing typical challenges, or is this something they should be more concerned about? The sentence, “Well, we are seeing the same things at home and at school,” became a reassuring refrain of mine, reminding parents that they aren’t alone in their concerns, and that together, with their student, we can begin to address these challenges.

I realized that my role was not simply to acknowledge and address parental concerns, but rather to give it context in the greater scholastic picture, rephrasing their concerns based on information that only I had as their teacher. It was with this mindset change, with this acceptance of my moral authority, that I fully embraced my role as a teacher leader.

As the year evolved, I no longer felt as though I was playing the part of a teacher leader. I felt more confident in asserting my opinions but also more comfortable in asking for help. We need to find ways to encourage teacher leadership and strengthen shareholder relationships. Too many teachers share the same underlying fear of parents that I’ve described, and too few teachers seek to do something about it. Teacher prep training does little to prepare you for the myriad of challenges involved in parent communication, and without that training and support, many teachers choose to shy away from active parent engagement. Yet, by really seeking to make parents active participants in your classroom, to share curricular resources and take part in student assignments, to have a voice in their child’s education, we increase our moral authority and strengthen our leadership potential.

Meeting the minimal expectation of parent communication is not enough; instead, we must invite parents into our classrooms, into our curriculum, and into their students’ academic lives. The results — an increase in teacher leadership, an acceptance of our moral authority, and a strengthening of shareholder trust — are definitely worth the risk.

At 22, some small part of me thought that that CEO parent was right. What did I know? But 11 years later, I know that the question he was really asking wasn’t, “What did I know?” but, “Why should he listen?” Looking back, I wish I hadn’t been so afraid. I wish I had known that what I truly wanted to say was, “I know that you love your son, and I know that sending him to my classroom every day is an act of trust. I know that I have to work hard to earn his and your trust, and I thank you for giving me your time and a chance to earn your trust. I hope you’ll give me a chance to share what Johnny and I have been able to accomplish so far together, but first, what can I do to support you?”

Looking back, we were both scared. He of what I would say, and I about how he would react. But Johnny needs us to overcome that fear so that he may be as successful as possible. Besides, who else is going to tell them that Rover’s favorite author is Shel Silverstein?

Jennifer has taught for eleven years, the past eight at Pine Valley Elementary School in New Hanover County. A National Board Certified teacher and a graduate of Boston University, Jennifer has degrees in elementary and mild/moderate special education. She holds a Masters of Education in Curriculum, Instruction, and Supervision, as well as her Middle School Mathematics and Academically and Intellectually Gifted licensure. 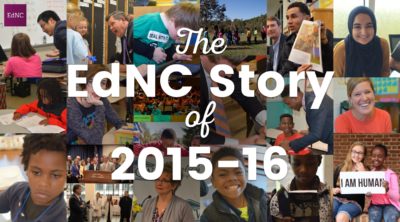 What we call international education, the rest of the world calls education