In the Wake County Public School System, Black students received 62% of all short-term suspensions in 2018-19, even though they made up less than 23% of the student population. Black males received the only three long-term suspensions and three expulsions in the state’s largest district.

The data on school-based referrals to the criminal justice system are even more staggering. Black students represented 73% of referrals that school year.

These disparities are not new, says Letha Muhammad, the executive director of Education Justice Alliance. A mom of three, she has always been involved in her children’s schools. But in 2011, as she learned more about disparities in discipline, she was led to become involved on behalf of many more kids.

With Muhammad, Director of Organizing Fernando Martinez and a team of community-based volunteers, EJA is fighting to decrease incidents of unfair suspensions and expulsions, and to improve positive approaches to discipline.

“So much of our work is around really telling the truth as we know it to be,” Muhammad said. “And even uncomfortable truth.

“I don’t mind being a disrupter out here because otherwise we’ll just continue the same inequities, and students and families — in particular, Black and Brown working-class folks — will continue to get the short end of the stick as it relates to our public education system. I’m just not OK with that.”

Roots in the YWCA

In 2011, Muhammad started attending “study circles” led by the YWCA of Southeast Raleigh. Her oldest daughter was a sixth-grader at Moore Square Middle School in downtown Raleigh.

The study circles were based on Glenn E. Singleton’s book “Courageous Conversations About Race.” They brought parents and educators together to talk about institutional and structural racism.

The group looked for opportunities to get Black students, in particular, access to higher level courses. It also took a hard look at the disparities in school discipline.

“When I went through that program as a parent, I just was like, ‘Oh, man, this is giving me historical context for experiences that I had with my daughter so far in school,’” Muhammad said.

Through the YWCA, about 10 parents and grandparents formed a parent advocacy group. They wanted to change a system where too many Black and Brown kids dropped out or went to prison.

Abruptly, though, the program ended when the YWCA closed its doors because of a lack of funding.

“It was such a shock to the community because the Y was a staple in Southeast Raleigh and doing really important work,” Muhammad said. “So there was a group of us who didn’t want the education advocacy work to stop.”

That’s when EJA was born.

“We wanted to continue this important work and see the unfair treatment end,” said Martinez, who joined the group about 2012.

EJA existed for years as a grassroots, community-based organization – entirely led by volunteers. For certain campaigns, it brought in a little grant funding, but by and large there was no money.

“It was just people who were passionate about trying to do something about the structural inequities that exist in Wake County,” Muhammad said.

That changed in 2017, when EJA became a nonprofit and hired Muhammad and Martinez to lead its efforts. The impetus for amplifying its work was easy to see, Muhammad said. After Donald Trump won the 2016 presidential election, she said, she saw an almost immediate rise in racist discourse and activity around the county.

She recalls an incident where a teddy bear was found hung by a noose. In another, a Black student was suspended after defending himself from bullying, which included racial slurs.

“There was this uptick in really ignorant, racist and anti-immigrant sentiments floating around and attacks happening,” she said. “It was a level of fear associated with school, and it really made our communities feel uncomfortable about coming to school or sending their kids to school. I remember my kids, at one point in January after the election, saying certain friends weren’t in school anymore.”

At that point, the group knew it needed to do more.

The names and faces have changed over time, but participation in EJA has grown steadily. From a beginning of about 10 consistent, active members, it’s now common for the group to see 50 or even 250 people respond to calls to action.

“It’s like a revolving door because people’s priorities change,” Martinez said, noting that kids go off to college or adults move or take new jobs. “But it’s revolving, so there are always more who will get involved.”

The group’s early efforts were mainly organizing the community to hold rallies, showing up at candidate forums, meeting to talk about superintendent hires, and even sitting on a Wake County task force on disparities in disciplinary practices.

The group has always focused on intergenerational organizing, too. It leads parent advocacy meetings to teach parents about their rights. EJA also meets with student groups and supports them with their campaigns.

As the group formalized, EJA also filed as co-plaintiff in a couple of civil rights lawsuits against the Wake County Public Schools System around disciplinary disparities. As a remedy in the settlements, the district created its Office of Equity Affairs.

“Our approach has changed in a way that we now have this inside-outside strategy,” Martinez said. “We [are] taking the right actions and calling the rallies and protests, to get attention to things that are fundamentally wrong within Wake County schools. However, now that we have an Office of Equity Affairs, we are at the table and working with some of the people” with that office.

Over eight years, EJA has pushed the district to revise its student code of conduct, better train school resource officers, change a definition of long-term suspension, reduce suspensions and expulsions, and educate parents about their rights.

During its period of advocacy, EJA has watched overall suspension and expulsion numbers in the district drop. But the disparities have grown wider between white students and Black and Brown students.  So now, it seeks the removal of all police officers from schools.

“We recognize that these structural inequities exist within this school district, and we’re naming them and saying it is not OK,” Muhammad said. “And we’re holding folks that are elected and are in higher positions accountable to do something about it. Sometimes you’ll talk to district folks and they’ll claim we’re doing XYZ and we laugh, because we know you’re doing XYZ because we’ve been pushing you to do XYZ.”

Martinez talks about the changes in the organization’s tactics and is proud of how it has grown. But one thing has stayed the same.

“Our approach has been changing, because now we are more evolved,” he said. “And we also have the support and credibility in the community. But what we have been doing, what we have been fighting for, that has not changed.” 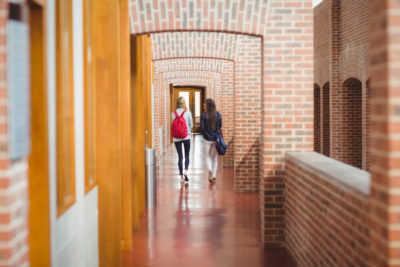