The following is a press release from North Carolina Public Schools.

The schools (listed below) represent the fourth and final round of recipients of federal School Improvement Grants (SIG) awarded by the N.C. Department of Public Instruction through a competitive federal application process. The 19 schools, in eight districts, will benefit from SIG funds North Carolina has received for the last three years – allowing for five years of support instead of three years provided for previous cohorts of schools. North Carolina received approximately $13.9 million in 2014, $14.1 million in 2015, and recently awarded $12.2 million for 2016.

The grant competition was open to Title I or Title I-eligible schools that previously had not been awarded the grant and, based on the most recent data available, had been identified as “priority schools,” or the lowest performing five percent of schools in the state, determined by state end-of-grade or end-of-course tests.

The schools that submitted official “letters of intent to apply” by a summer 2016 deadline and that completed the full application process by September represented 44 of 69 possible traditional schools from 17 of a possible 29 school districts, and two of a possible eight charter schools. In all, 77 schools were eligible, and a combined 46 traditional and charter schools submitted the letter of intent and completed the competition requirements for the five-year awards.

Since 2010 in North Carolina, 61 schools in three previous rounds of School Improvement Grants – in 2010, 2011, and 2013 – have received a total of nearly $144 million in federal funding to pursue three-year efforts to boost student performance through aggressive turnaround approaches. Some schools received as much as $2 million for each of the three years of participation though others received less than $1 million total depending on need and student population.

The grant program is intended to achieve significant gains for schools struggling with low student performance by adopting one of several turnaround models prescribed by the federal government but chosen by the school. These have included converting to a charter, replacing the principal and at least half the staff, outright closure and a transformation approach that involves replacing the principal and taking a series of steps to increase teacher effectiveness, overhaul instructional strategies, and increase parent involvement, among others.

Schools in the latest round of grants will get two additional years of grant support – for a total of five years – and have two additional turnaround options from which to choose – for elementary schools, one that focuses on improving early learning, and for all schools, a “whole-school” reform approach allowing schools to adopt a model for which research shows evidence of success.

The federal School Improvement Grants (SIG) program awards grants to states to provide competitive sub grants to local school districts for providing assistance for school improvement. States must award sub grants of at least 95 percent of the funds it receives to districts for school improvement activities. States must give priority to the districts with the lowest-achieving schools that demonstrate the greatest need for such funds and the strongest commitment to ensuring that the funds are used to support the lowest-achieving schools to meet improvement goals. The federal requirements for the grants define school districts with the “greatest need” for SIG funds and the “strongest commitment” to ensure that the funds are used to substantially raise student achievement in the persistently lowest-achieving schools in the state.

States are also given flexibility to develop their own intervention model that focuses on whole-school reform and is designed to improve student achievement. In schools that have received funds under this program in the past, up to 80 percent of students are from low-income families – 28 percentage points higher than the average school. In North Carolina, some schools that have benefitted from the grants have enrollments where nearly 100 percent of the students are from low-income families.

Funding projections in the table below showing awarded schools are based on actual (FY 14, FY 15) and estimated (FY 16) funding from the U.S. Department of Education. Each school’s actual award amount will be finalized prior to Jan. 1, 2017. 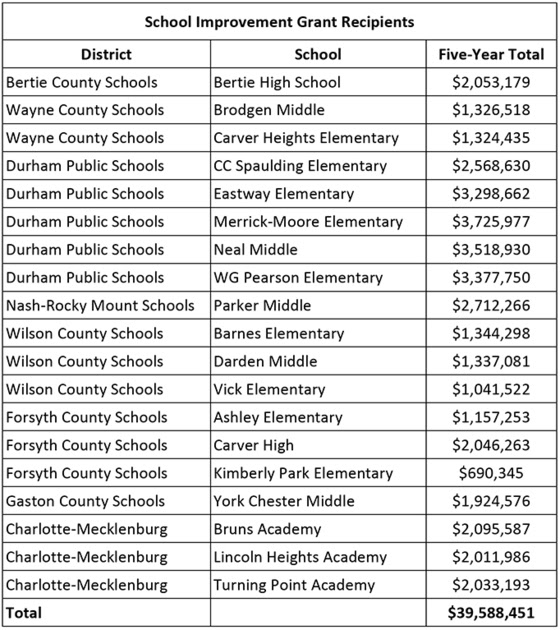