Durham Pride: LGBTQ+ affirming faith groups say ‘God loves you and so do we’

Durham Pride: LGBTQ+ affirming faith groups say ‘God loves you and so do we’ On Duke’s East Campus quad, more than 100 vendors set up for the festival following the parade. The vendor line-up was comprised of Durham food trucks, local businesses and organizations, and health resources, including vaccines for Covid and monkeypox.

More than a dozen faith groups also joined the vendors, sharing many forms of the same message: God affirms LGBTQ+ people, and so do we.

“For so many LGBTQ people, the church is a site of harm and religious spaces are dangerous and traumatic,” said Jesse Huddleston, co-chair of the steering committee for Pride: Durham, NC. “There’s a long way to go, but I’m glad that people are on that journey. Part of that journey is being able to celebrate, enjoy, and delight in all of creation — and that includes people who are LGBTQ.”

It was a “full-circle kind of moment,” they said. Huddleston, who uses he/she/they/we pronouns, works as senior program coordinator at Duke’s Office of Durham and Community Affairs (DCA) and graduated from Duke in 2010.

As a student, Huddleston saw Pride parades from their on-campus dorm room but didn’t go due to their religious upbringing regarding sexuality.

“To literally see pastors and other church community members present and enthusiastic — they weren’t the ones protesting — it was a particularly resonant part of what made the day special for me,” Huddleston said.

‘We celebrate each other’

Pride: Durham, NC is hosted by the LGBTQ Center of Durham and “serves as the annual celebration of community, family, pride, and activism in Durham and across the state,” according to the organization’s website.

In 1986, Durham’s first iteration of the Pride gathering took place on Duke’s campus, according to the Center’s website. Over the next 14 years, the NC Pride March traveled to several major cities in the state. In 2000, NC Pride shifted the parade from summer to fall for cooler weather and decided to base the march in Durham. Eventually, NC Pride dissolved, and in 2018, the LGBTQ Center took leadership of the newly created Pride: Durham, NC.

This year’s theme, IRL, emphasized the importance of gathering people together “in real life,” with the goal of “inspiring real love.”

“It was just a really nice time to see the Durham community celebrate the queer community, which is really prevalent in Durham itself,” said Rachel Geddes, community organizer of Divinity Pride.

Divinity Pride “affirms the dignity, faithfulness, and strength of LGBTQIA+ humans at Duke Divinity,” according to the group’s Facebook page. Given “the history of homophobia and exclusion in a lot of faith communities,” Geddes said it was really nice to see churches present at the event — her first Pride.

“Among (Divinity) Pride leadership, we really think it’s important to reclaim those spaces and to show that people who are queer can also have a strong faith in the Lord,” she said. “It’s nice to be able to have a sense of community that we celebrate each other.”

‘Taking care of one another’

The event was held only a few days after the Durham Police Department reported three acts of vandalism in the city, two of which occurred at businesses with LGBTQ+ displays.

Through This Lens, an art gallery with a hanging Pride flag, was vandalized with messages saying “(expletive) Pride” and “Love God” in blue and red spray paint, the News & Observer reported.

Several church volunteers present at the festival cited the vandalism as another reason their church wanted to set a different example. Some volunteers also mentioned Pioneers Durham, a church and business in downtown Durham that has faced community pushback for its stance on LGBTQ+ inclusion.

But 5.3 million LGBTQ+ adults are religious, according to an October 2020 report from UCLA School of Law’s Williams Institute. Religious LGBTQ adults are found across age ranges, in every racial-ethnic group, among married and single people, and in rural and urban areas.

Other religious groups, clergy members, and people of faith were no doubt present, just not as vendors.

Durham County Commissioner Nida Allam, the first Muslim woman to hold an elected office in North Carolina, attended along with other city leaders. And Jewish Life at Duke and the Center for Sexual and Gender Diversity co-sponsored a Pride Shabbat the night before the parade.

On one route from overflow parking to the East Campus festival, pedestrians walked past Duke’s Freeman Center for Jewish Life. A rainbow Star of David was taped to the center’s front door.

(Durham’s Beth El Synagogue has participated in past Pride parades. This year’s parade took place during preparation for the Jewish high holiday season ahead of Yom Kippur, which starts Oct. 4. In 2017, before the LGBTQ Center took charge of the parade, NC Pride’s organizers apologized for hosting the event on Yom Kippur, which excluded many Jewish people from participating.)

For Huddleston, it’s important that faith groups sit in the tension of celebrating Pride while also working to earn the trust of harmed communities.

“Come to the Pride Parade and wave your rainbow flag and take selfies and soak in the sunshine and sing songs and have a great time,” Huddleston said. They must also do the work.

This story is a part of EdNC’s faith work. If you’d like to share your faith story with us, reach out to hmcclellan@ednc.org. 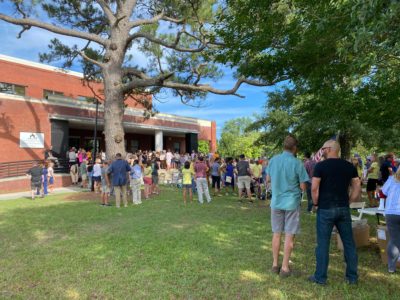 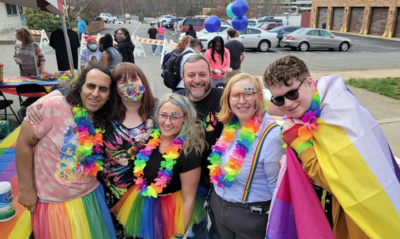 I report on faith for EdNC. Here’s why