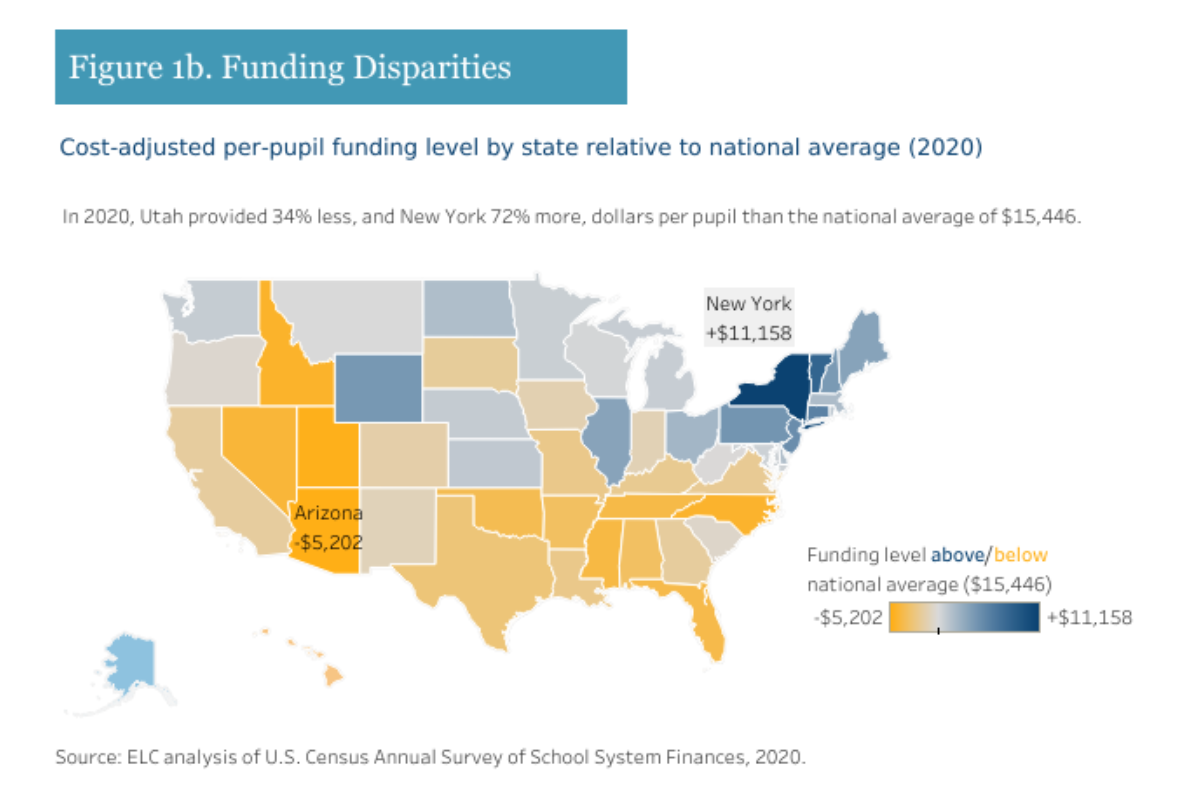 A map of K-12 public school system funding levels across the U.S. Courtesy of the 2022 Making the Grade Report from the Education Law Center.

North Carolina was ranked last in a nationwide recent report about K-12 public school funding released by the Education Law Center (ELC) at the end of last year.

Every year, the ELC releases Making the Grade, which provides an annual overview of school finance in each state.

The 2022 report shows data for public school systems from the 2019-2020 school year – notable for the disruption from COVID-19, which included school shutdowns and transitions to virtual learning.

In North Carolina’s most recent budget, the state legislature appropriated $11.2 billion for education (not including higher education).

The report used three measures to rank how fair school funding is by state. Here are the report’s findings:

ELC defined the funding level as how much schools receive from state and local revenues, and used a per-pupil number that was adjusted for inflation. This number didn’t take federal dollars into account.

State and local per-pupil expenditures increased by $1,265.94 from 2008 to 2020 without adjusting for inflation, according to the North Carolina Public Schools Statistical Profile. However, the report found that North Carolina’s funding levels decreased by approximately 10% when adjusted for inflation.

This measure looks at how additional funds are allocated to districts with higher levels of student poverty.

ELC defines this as the amount of funding that goes toward public K-12 schools as a percentage of the state’s GDP.

The ELC emphasized in the report that state legislatures decide how much money school districts in their state receive.

The report didn’t focus on federal funding. When the pandemic shut public schools across the country down, Congress passed relief packages that provided one-time monetary distributions for schools to spend on resources like technology, high-speed internet access, and up-to-date HVAC systems.

This relief allowed districts to gain access to essential programs, services, and infrastructure needs for students, helping to minimize inequities in how schools are funded. However, as funds run out, according to the report, state lawmakers need to reform school finance to continue to adequately fund districts.

In November, the N.C. Supreme Court ruled the state must transfer money to fund the Leandro Comprehensive Remedial Plan (CRP). One component of the Leandro plan is for North Carolina to have a finance system that provides adequate and equitable funding and resources to school districts. Stay updated on EdNC’s Leandro coverage here.

Sonia Rao is a spring 2023 reporting and engagement fellow for EducationNC.