For eight years, a Forsyth County coalition of organizations and advocates called the Pre-K Priority has been trying to figure out how to strengthen and expand pre-K access in the area — with an ultimate goal of establishing universal pre-K.

At the end of September, the group reached a milestone in its journey toward that goal. The Forsyth County Board of Commissioners approved the first public investment for the group: a $3.7 million grant to support 30 pre-K classrooms and educators over two years through compensation parity with public school teachers, professional development and coaching, family engagement specialists, and more.

The Forsyth coalition has discovered how statewide inequities in early childhood funding and access affect their local landscape. Many localities are considering their roles in addressing families’ early care and education needs. That often means filling funding gaps left because private, state, and federal dollars don’t cover the full cost of high-quality care and education.

Forsyth elected officials saw the difference in state funding given to different communities — as well as how other communities are investing, said Louis Finney, president and CEO of Smart Start of Forsyth County.

“It was good (for) elected officials to compare and contrast what other counties are doing to support pre-K, particularly when we look at Buncombe County, which is a far smaller county than (Forsyth) and they contribute about $3 million,” Finney told EdNC.

“And then being able to see the trends within the past five to seven years, where Forsyth County from a state perspective was getting less funds per child than, say, Greensboro, that’s only 30 minutes away.”

Pre-K Priority plans to use the funds, which come from the federal American Rescue Plan Act (ARPA), to establish a high-quality pre-K model and to fund research on its outcomes as a proof point for further local and state investments. The pilot program will reach about 540 children and 60 teachers.

“What was critical when using ARPA dollars is that you come in with the intent of having a good evaluation tool to justify why this should be something that’s funded permanently,” Finney said.

Leveling the playing field, focusing on the child

The grant funding will go to Smart Start of Forsyth County, which will partner with many organizations in the Pre-K Priority for various efforts.

The pilot will involve pre-K classrooms in private centers, Winston-Salem Forsyth County Schools, and Head Start programs. Some of those classrooms are funded by the state’s NC Pre-K program.

“It means that regardless of income level, children in private slots, Head Start, or NC Pre-K slots will receive the same comprehensive, high quality model,” said Traci Ross, president and CEO of Family Services, which administers Head Start programs in the county.

Across the state and country, counties such as Mecklenburg, Polk, Buncombe, Durham, and Wake have used local dollars to expand public pre-K access — for 4-year-olds and at times for 3-year-olds. Statewide, NC Pre-K reached about 19% of 4-year-olds in 2021. Before the pandemic, the program was reaching about a quarter of 4-year-olds.

Last summer, the Pre-K Priority launched its Early Childhood Education Task Force, which will release a report this fall with recommendations on how to expand high-quality pre-K, “reflecting much of what will be piloted in the two-year program funded by the ARPA grant,” a news release says. The task force has since met 12 times, Finney said, with a strong focus on parent voice and equity. 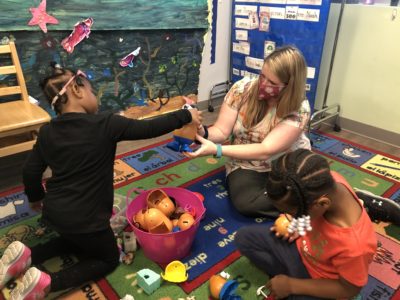 “What we’re trying to do is level that playing field and just focus on this as a children aspect as opposed to different program options,” he said. “That way, regardless of where a child is at in our county, we want them to get the equal services.”

The group’s website lists the following as goals of the pilot:

– address challenges within the Pre-K landscape and set standards for future expansion;

– invest in the development and retention of Pre-K educators through coaching, technical assistance and salary parity within the project’s 30-classroom cohort to help inform scaling those aspects across the full Pre-K landscape;

– support parents and families of the cohort classrooms using evidence-based programs and engaging Family Advocates/Specialists; and

Giving all children equitable learning opportunities before kindergarten is critical to improve measures like third-grade reading levels, Finney said. About half of third-graders in Forsyth County scored proficiently on reading tests in 2018-19.

“Success starts really at zero in the womb, and working with 4-year-olds is a start, but the reality in our county is we need to really start a lot earlier than that,” he said. 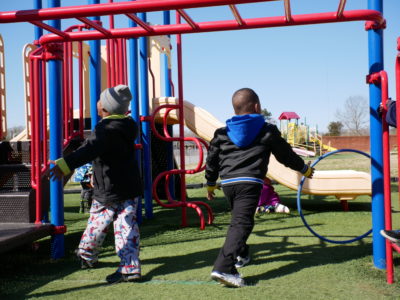